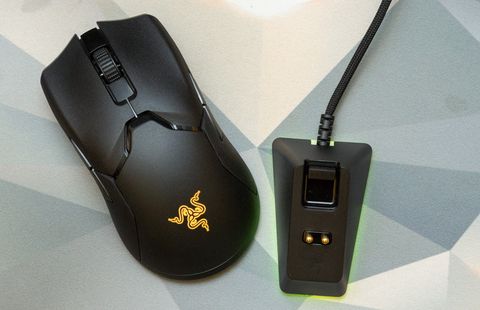 Razer’s Viper Ultimate ($150 MSRP) wireless RGB gaming mouse offers the same impressive technology, including the same sensor, wireless tech, as the Razer Basilisk Ultimate ($170 MSRP) in a much smaller, lightweight package. This is a blessing for those with smaller hands but can be uncomfortable for everyone else. The Viper Ultimate's diminutive size and the placement of its side buttons mean a claw grip is almost necessary to avoid accidental clicks, which means this isn't the best gaming mouse for those who prefer to palm their mouse.

Gamers may also miss the ability to make sensitivity adjustments on the fly, but those seeking a no-frills experience will feel right at home. The Viper Ultimate is less about tweaking and more about getting in the game and doing damage.

The Viper Ultimate hearkens back to classic Razer mice (the Deathadder and the Mamba come to mind ) for its overall design philosophy but with less curvature, allowing for ambidextrous play. There are two buttons on either side, another nod to left-handed users.

It's finished in a matte black and features rubberized sides for a firm, comfortable grip. The illuminated Razer symbol near the back of the mouse is the only RGB lighting zone, making the Viper Ultimate a more subdued product in the bling department.

Like the Basilisk Ultimate, the Viper Ultimate has a compartment on the bottom of the mouse that houses the USB Type-A dongle for connecting to your PC. You can charge the mouse with the the included RGB charging dock when idle or the detachable MicroUSB to USB Type-A cable when in use.

Some concessions were necessary to accommodate the Viper Ultimate’s small form factor. The CPI (counts per inch, which refers to how many counts your mouse takes per inch it moves) switch is located on the underside of the mouse rather than directly beneath the scroll wheel, like with many other gaming mice. While this ensures there won’t be any accidental clicks, it also means that on-the-fly CPI adjustment isn’t really possible.

The Viper Ultimate is only 1.49 inches (37.8mm) tall, and this short stature can create problems for gamers with larger hands who prefer a palm grip. With very little real estate to cling to, the ring and pinky fingers naturally rest in a position that make accidentally clicks far too easy. The Viper Ultimate is much better-suited for users with smaller hands who prefer using a claw grip.

Weighing in at only 0.16 pounds (74g), the Viper Ultimate is an extraordinarily lightweight mouse. This can be a blessing or a curse, depending on who you are. If, like me, you prefer a weightier mouse, you'll find yourself regularly over or under correcting because the lack of heft brings momentum into play. However, eSports pros who rely on economy of motion will likely have a more positive experience.  The lack of weight was less objectionable when I used the Viper Ultimate for daily productivity tasks.

The Viper Ultimate performed on par with the Basilisk Ultimate in games, making use of the same proprietary Focus+ Optical sensor (20,000 CPI sensitivity and 650 inches per second speed), which was tremendously accurate and responsive. Additionally, each of the mouse's buttons uses an optical switch, which registers with a light instead of with a physical touch. The switches' speed (Razer claims a 0.2ms response time), made every action feel near-instantaneous.

Ultimately, though, what makes a gaming peripheral special is how good it is at making the user forget about the equipment in their hands. This is where the Viper Ultimate may come up short for some users. As a user with large hands who prefers a palm grip,  using the Viper Ultimate felt alien. Gamers with smaller hands who primarily claw grip their mouse will doubtlessly have a better experience.

Likewise, the lightweight feel of the Viper Ultimate will take a lot of getting used to for gamers who prefer a beefier mouse. At 0.16 pounds (74g) compared to the Basilisk Ultimate’s 0.23 pounds (104g), this difference is impossible to ignore. While playing FPS titles like Counter-Strike: Global Offensive (CS:GO), I regularly found myself aiming past my target, due to how little effort was required to move the cursor. This won’t be a problem for gamers who prefer light mice, but everyone else can expect an adjustment period until making smaller movements feels more natural.

Since the CPI is located on the bottom of the mouse to accommodate the significantly reduced size, access to on-the-fly DPI adjustments is problematic at best. Some gamers will miss the ability to downshift in-game at a moment’s notice.

Gaming performance overall left me with no complaints, but the design and feel of the Viper Ultimate made it apparent that this mouse was built for gamers with different needs than me.

Like the Basilisk Ultimate, the Viper Ultimate performed on par with wired gaming mice during our testing period. Input lag was practically non-existent – movement and clicks translated to onscreen action with no discernible delay.

Any barrier to in-game performance using the Viper Ultimate was entirely due to my personal preference for weightier mice. The Viper Ultimate performed equally well in Doom, DOTA 2 and Total War: Warhammer even if I did not.

Like the Basilisk Ultimate, the Viper Ultimate uses Razer’s proprietary HyperSpeed Wireless technology amplified by its new Adaptive Frequency Technology. According to Razer, the new feature is meant to provide lag-free connectivity by scanning frequency channels for interference every millisecond in order to detect frequencies to avoid and switch to the fastest channel instantly.

As is the case with all Razer products, it is recommended that you install Razer Synapse to customize lighting, CPI settings and saved profiles. The mouse will work without any software installation, but in order to get the most out of it, Synapse really is a must.  The software lets you store up to 5 profiles that each have their own CPI Step settings, button assignments and lighting effects.

During my testing, the Basilisk Ultimate lasted for about 12 hours of intense use with full RGB lighting on. Razer claims the battery can last up to 70 hours with lighting disabled.

You can extend battery life by setting the threshold for when the mouse enters Low Power Mode. By default, this is set to 30% battery life.

To charge the mouse, you can use the included MicroUSB to USB cable or the charging dock, which also has an RGB strip along the bottom and can sync with saved lighting profiles across other Razer Chroma-enabled devices.

The Razer Viper Ultimate makes great use of a premium sensor and wireless technology. If you prefer a lighter-than-air pointer and count on making smaller movements, the Viper Ultimate will be a great fit. Some, like eSports and left-handed gamers, will love the lightweight, ambidextrous form factor.

However, its design ultimately makes it more of a niche product. Folks with larger hands who prefer palm grips may find long gaming sessions uncomfortable. Those with sizable mitts and a palm grip are susceptible to accidental side button pressing with a palm grip. You should also look elsewhere if you're seeking something with a weightier feel. Those you prefer mice on the stouter side and a palm grip more will prefer the Razer Basilisk Ultimate.

But if you want light gaming mouse with superior performance that works well in either hand, the Viper Ultimate could be for you.