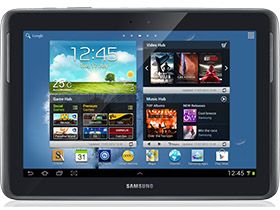 Although it has more powerful hardware than the Wi-Fi model, the Samsung Galaxy Note 10.1 (2014 Edition) LTE's over-sized screen resolution, slow updates, and poor software optimization really show through in the user experience.

To be perfectly frank, Android isn't having the same impact on the tablet space that it enjoys in the smartphone sphere. Whether due to pricing, marketing, features, or specific apps, outside of the ultra-affordable 7- to 8-inch models, there just aren't many serious offerings with enough allure to upend the iPad.

Samsung, one of Apple's chief competitors in all things mobile, is doing just about everything in its power to change that.

The Galaxy Note 10.1 (2014 Edition) is positioned as Samsung's premium offering in the $500+ 10-inch tablet segment that competes directly with Apple's iPad Air. It sports several key distinguishing features that the company hopes lend it an advantage, though. For instance, its various S Pen capabilities are deeply integrated into almost every aspect of the user experience. Multi Window application capabilities emulate desktop-like multitasking. A chassis redesign takes inspiration from the Galaxy Note 3. And an octo-core processor is intended to serve up strong multimedia, Web browsing and gaming experiences. Finally, an ultra-sharp 2560x1600 display yields one of the highest pixel densities on the market.

We're sure that Samsung would like to use its own SoCs in as many of its mobile devices as possible. Whether the company has issues with scaling to meet demand, or simply isn't able to match the technology built into Qualcomm's product line-up, Exynos-based processors don't power all of Samsung's offerings, though. In the Note 10.1 2014 Wi-Fi model, Samsung showcases its Exynos 5 Octa 5420, which uses ARM's big.LITTLE architecture. Meanwhile, the LTE-capable version sports Qualcomm's Snapdragon 800 AA. Check out Qualcomm Snapdragon 801: Performance Previewed for more information on distinguishing the various Qualcomm SoCs.

Given that both versions of the Note 10.1 are virtually identical on paper, aside from their SoCs, this gives us a good opportunity to compare the Exynos 5's performance to the Snapdragon 800's.

The Samsung Galaxy Note 10.1 (2014 Edition) comes in either classic white or jet black. Aside from personal preference, color choice is actually quite important with the Note 10.1, since the two versions actually have different finishes.

The Wi-Fi unit we're reviewing is housed in a white chassis, which has a noticeably slicker finish than our LTE-capable black version. The reason for this is that the white model is more prone to showing dirt compared to the more forgiving black exterior. As a result, it needs to be better at repelling dirt, which the tackier black finish doesn't do. You definitely get more grip from Samsung's black version, which comes in handy on the heavier LTE tablet.