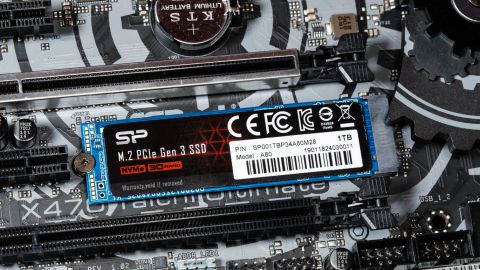 Silicon Power’s latest PCIe 3.0 x4 M.2 NVMe SSD lacks a creative name, but that doesn’t mean it is any less worth looking into. As a matter of fact, it should be high up on your list if you are in the market for a new SSD today. It’s actually a great buy.

Performance is just as expected, given it's powered by Phison’s E12 NVMe controller and Toshiba BiCS3 TLC NAND flash. That's an established pairting that we've seen in drives before, to there wasn’t much mystery around how it would perform. In our testing, it basically mirrored the MyDigitalSSD BPX Pro, another E12 powered SSD, and delivered high-end performance overall. While its write speed degrades to 1GBps, this is significantly better than that of some others like the Intel 660P or even any SATA SSD.

The P34A80 comes backed with a 5-year warranty, which is great to see. But, because of its lower prices, endurance takes quite the hit. At 500TBW, our 1TB P34A80 has slightly lower endurance than that of the Adata XPG SX8200 Pro, WD Black SN750, and Samsung 970 EVO Plus, and about a third the endurance of the MyDigitalSSD BPX Pro. That's definitely something to keep in mind if you plan on regular workloads that hammer the drive with lots of writes.

Aesthetics could use some improvement too. While Silicon Power’s P3485 model features a small and quite attractive looking heatsink overtop, like many other products out there, the P34A80 we have here today could use some better looks. Placing a product SKU overtop is not the way to impress customers looking to put their drive in a windowed case. Likewise, the lack of up-to-date software support is an issue, which we hope the company will correct soon.

But, these minor qualms can't overshadow the P34A80’s value. Silicon Power’s P34A80 is a high-performance device, but its prices aren’t reflective of such. At just $0.11-0.15 per GB, depending on capacity, the drive is even cheaper than the QLC based SSDs at some capacities.

I’d recommend this over similarly priced QLC drives like the Intel 660P or Crucial P1 any day of the week. You get higher performance and endurance for essentially the same price. Again, what’s not to love about that?