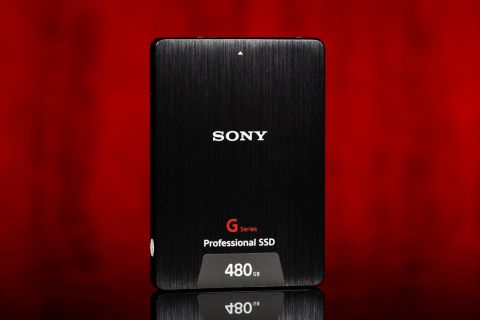 It is a hard toss-up between Sony’s G Series Professional SSDs and the legendary Samsung 860 PRO. Bear in mind: Sony designed the G Series solely for video recording, so it isn't a great fit for normal desktop PC use. Both the 860 Pro and the Sony SSD are a similar value if you're considering a new high endurance SSD for your recording applications, but the G Series is better suited for the task.

Long Warranty, High Endurance, and a Price to Match

Sony isn't the first name that comes to mind when we think of SSDs, but the company does have a few of them under its belt. The fact is, the company's SSDs aren't for most consumers as much as they are for the media professionals or prosumers. It isn't surprising, then, that the Sony G Series Professional SSD is packed with endurance and boasts a ten-year warranty, much like the Samsung 850 PRO and SanDisk Extreme Pro that debuted four years ago.

Sony has adopted the endurance marketing tactic to convey its reliability to the prosumer market. As a media recording device with sequential read/write throughput of 550/500MB/s, the SV-GS48 excels. But beyond a big price tag, the SV-GS48 has little to offer for the typical PC gamer that doesn't need higher endurance or the long ten-year warranty.

Sony developed the SV-GS48 for media recording first and foremost. Specifically, Sony designed it for Atomos on-camera, portable recorders, and Blackmagic recorders. A sturdier connector that could stand the test of time with constant use is imperative for media professionals, so Sony beefed up the SATA connector: The G Series is rated to withstand up to 3,000 repeated insertions and removals. The G Series also has data protection technology that preserves the data on the drive, even if it is disconnected improperly or in the case of a power loss event.

Wear adds up quickly if you're recording terabytes of video a month. Consumer drives with ratings of 100-400TBW can die within a year or two of constant use with extreme workloads. That's why Sony included beefy ECC algorithms to help extend drive life beyond the norm. The 480GB model offers 1200TBW (terabytes written) of endurance, while the 960GB has a 2400TBW rating. That’s double the Samsung 860 PRO and almost a petabyte more than the newest 1TB Phison E12-powered M.2 SSDs.

Sony also optimized the firmware for extended sequential write workloads. This enables consistent write performance, which in turn allows users to record 4K RAW footage in high-end recorders. But it comes at a cost: due to the firmware tuning, 4K random performance is lower than the average mainstream SATA SSDs for desktop PCs.

Sony rates the G Series for up to 550/500 MB/s of read/write throughput but doesn't disclose random performance. Sony’s G Series Professional SSD comes in two capacities of 480GB and 960GB. They currently retail for $299.95 and $533.35, which is roughly double the price of the Samsung 860 PRO.

Sony’s G Series Professional SSD connects to the host system or video recorder via the SATA 6Gb/s interface. It features a sleek black brushed metal finish and comes in a 2.5” 9.5mm form factor. It is slightly thicker than most modern mainstream SSDs, which are 7mm thick, but this isn’t a concern for its target market.

Sony isn't disclosing the controller model, but we were able to track down the DRAM and NAND. The SV-GS48 has 512MB of DDR3L DRAM from SK Hynix and Toshiba’s planar 15nm TLC NAND flash. In all, there are eight 64GB NAND emplacements on the PCB. The SV-GS48 exposes 446GB of usable capacity after formatting.