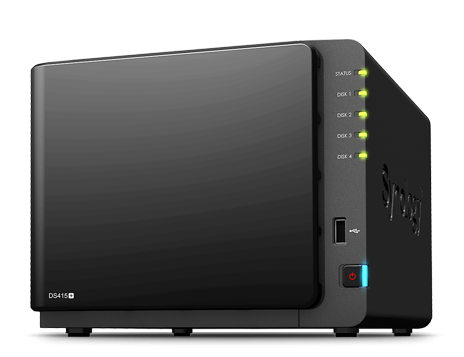 The real-world NAS workload tests over SMB agree with our synthetic benchmark results. Synology's DS415+ delivers respectable performance. In a few metrics, it even outperforms the Asustor AS7004T, which costs nearly twice as much.

The DS415+ is also really well-balanced, with only a slight deviation between its read and write numbers.

Microsoft introduced iSCSI support in Windows 2000, but the feature didn't take off in home or small office environments until small SSDs became affordable. Desktop enthusiasts can use the technology to run Windows and a handful of applications from local storage, and then install less critical apps to the NAS. iSCSI gives the host PC a drive letter for a volume of storage on the networked appliance.

In the office, system administrators can use iSCSI to centralize data. Keeping all of the important files locked away ensures the right users get the information appropriate to them.

With all of our time-based results calculated and converted to throughput, we see where the systems land. Synology's DS415+ falls right in the middle, and doesn't trail QNAP's TS-453mini by much at all.

The multi-client test moves us away from the Quanta CiB setup and over to 10 dual-Xeon servers loaded with a pair of Hotlava Shasta NICs, each of which supplies 12 gigabit Ethernet ports per server. Through the magic of Hyper-V, each server mimics 12 office-class desktops that run workload scripts with real Microsoft Office software applications on the device being tested.

Synology's DS415+ makes it through our multi-client test in good shape. Its throughput drops off at 96 clients, and the latency chart shows us why: that's where the system becomes overwhelmed.

The IOPS scaling we saw in our synthetic tests at increasing queue depths carries over to traditional server workloads. The quad-core Rangeley-based Atom in the DS415+ is older than the Celeron J1900 in QNAP's TS-453mini. But we think the IOPS it adds are worth paying a little more for. Intel's ARK tells us that the Atom costs an extra $20 and consumes five more watts. But if you want to use your system for serious workloads, you know which processor to pick.