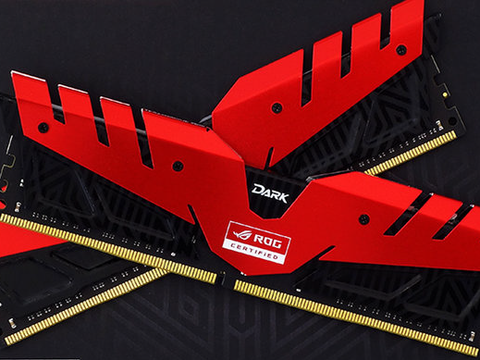 Note that we won’t be using the full name, Team Group T-Force Dark ROG DDR4, nor will we be using the full model number TDRRD416G3000HC16CDC01 outside of charts and tables. Many sellers don’t even use that ultra-long model number, instead removing the last two digits (TDRRD416G3000HC16CDC). Rest assured, your Google Product Search using the shorter number will take you to the correct parts!

Four-piece heat spreaders are removable, revealing 16 Samsung ICs, which is an important number when paired with the fact that each side is addressed as a separate bank, making these dual-rank DIMMs: The word rank is used to prevent confusion between a bank of chips (on a module) and a bank of cells (within a chip). Rather than fill one side of the DIMM with eight 8Gb ICs to reach 8GB, Team Group equipped the T-Force Dark ROG with sixteen 4Gb chips.

We’ve noticed in the past that four single-sided modules outperformed two single-sided modules when paired with the memory controllers of Intel’s Kaby Lake and Skylake CPUs, and today we hope to show how the four-module performance advantage can be achieved using two dual-rank DIMMs. This information could be particularly useful to owners of Mini ITX systems, since those have only two slots.

The rest of the specs are basic, beginning with T-Force Dark ROG’s mediocre 16-18-18-38 timings at 1.35V while using its XMP-3000 rating. Prior to enabling a motherboard’s XMP setting, the motherboard will boot these modules at DDR4-2133 CAS 15 and 1.20V. We’re going to ignore any restrictions of the lifetime warranty and try to push these to more enviable settings.