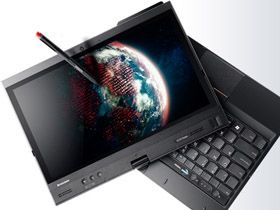 If you were to check the closet (or drawer or garage) of an early adopter currently using a tablet, you'll probably find some sort of older Intel Atom-based netbook in there, tossed aside like a disco-era jumpsuit. Tablets have seemingly eliminated netbooks as a viable market segment. Fortunately, true notebooks continue getting smaller, packing nearly desktop-class performance into nearly netbook-sized enclosures.

The newest Ivy Bridge-based models, most specifically, are mounting a formidable challenge by hitting tablets where they are (currently) weakest: compatibility with mainstream applications written for Microsoft Windows.

We commonly pack tablets and notebooks into our luggage when we hit the road. However, it's a pain in the butt to carry them both around. If we're forced to choose between them, the tablet always gets left behind, if only because it lacks the productivity potential of a business-class notebook. Although they're great for Web browsing and email, tablets are still insufficient when it comes to doing serious work.

Despite their limitations, tablets continue to interest us. Instant-on availability, one-handed operation, touch screen user interfaces, and comprehensive connectivity make them ideal travel companions. In contrast, notebooks are nearly impossible to operate unless you're sitting still. And they're overkill for reading articles and e-books.

The tablet PC turns out to be a really cool compromise, serving as a compact notebook and convenient tablet in one device. Tablet PCs have been around for years, but the lack of a true touch screen-enabled Windows operating system limited their popularity. As tablets come down in price (and size), opportunities for tablet PCs to really take off seem to continue drying up.

Unfortunately, we'll need to wait until Windows 8 launches before realizing the full potential of next-gen tablet PCs combining notebook and tablet functionality. The good news is that Lenovo is one of a handful of vendors still willing to carry the torch, even ahead of Windows 8. Its newest Ivy Bridge-based X230T is a convertible tablet in the company's ThinkPad X series, nearly identical to the Sandy Bridge-based X220T that came before.

The X230T employs a rugged magnesium alloy shell that will please professionals, though the palm rests and keyboard frame made of matte black plastic may be more susceptible to damage from rough handling.

Converting the X230T from its notebook configuration to a more tablet-like setup is easy. Twist the display clockwise (it only moves in one direction) to turn the screen around, and then close the lid. The screen orientation automatically switches from landscape to portrait, and you're ready to go. Lenovo also enables three hotkeys on the screen: orientation (to switch between landscape and portrait), Ctrl+Alt+Del, and sleep.

It's easiest to use the X230T in tablet mode with a digitizer pen that Lenovo bundles. It's stored internally, and easily ejected by pressing down on its red top from the right side of the chassis. Though the X230T is touch screen-enabled, the digitizer pen helps enable more accurate control of the tablet PC-specific features in Windows 7. If you're not already familiar with how Windows 7 works on a tablet PC, check out Windows 7: Tablet PC Features.

Our only concern about the X230T's body involves left-handed users. If you are a southpaw, holding the X230T in tablet mode points the internal exhaust vent toward your body. Naturally, as the thing heats up, you end up taking the brunt of the thermal output.

Next Page CPU Performance: Comparing Tablets And Tablet PCs
28 Comments Comment from the forums
Be In the Know