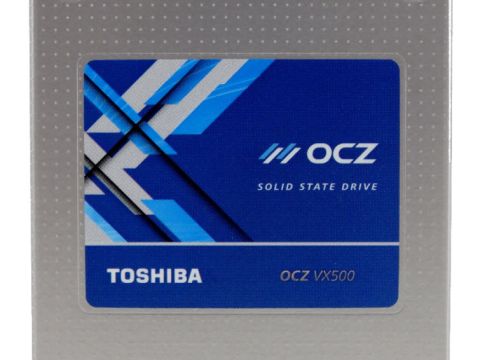 The OCZ VX500 is simply a remake of another mainstream Toshiba SSD. OCZ adds some functions through software, a more attractive package and name recognition. The VX500 costs less than the Q300 Pro, but the MSRP is not low enough for us to chose this direction over the 850 EVO products. The VX500 is a very good SATA SSD but it doesn't check all of the boxes like the established products that have already stood the test of time. Toshiba needs to try again and give customers what they want; high performance 3D NAND to compete with Samsung.

We've seen tremendous growth in the entry-level SATA and premium NVMe SSD segments over the last year. The middle ground has gone relatively untouched, but it is far from neglected. The mid-range has consolidated and now includes the SATA SSDs that we previously considered premium products. Toshiba's OCZ division has historically enjoyed a lot of success in this area, and it is looking to take the segment back with the VX500.

OCZ designed the VX500 to deliver the best SATA performance possible at a much lower price than competing products. The Samsung 850 Pro (512GB at $220) and SanDisk Extreme Pro (512GB at $199) still dominate the SATA performance segment, but new NVMe products are encroaching into the same price range. Most flagship SATA products use legacy NAND flash, which no longer offers a competitive advantage over NAND with newer, smaller (and 3D) lithographies.

The VX500 appears to be a rebrand of the existing Q300 client SSD that Toshiba sells in the channel. After Flash Memory Summit 2015, we discussed how good Toshiba's consumer SSDs could be, but very few shoppers are aware of them. You may have never even heard of the Q300 Pro SSD, even though we reviewed one back in May. Toshiba isn't known for its marketing prowess with consumer products, which contributes to the Q300's anonymity. In contrast, marketing is a core competency of Toshiba's new OCZ division, and you will know what an OCZ VX500 is by the end of the day (mission accomplished as far as Toshiba is concerned). That isn't to say that Toshiba doesn't have experience with SSDs; the company invented NAND. However, turning the experience into a sale is slightly more difficult.

We rarely see a new mid-range SSD launch for a reason. The 850 Pro and Extreme Pro are still available with very competitive pricing, and the performance of both is right at the upper limits of SATA 6Gbps. Also, many of the shoppers seeking best-in-class performance have moved on to NVMe-based products. The door is open, though, for OCZ to bring a higher level of performance down to the mainstream pricing segment. The goal is to make all SSDs cheaper, even the really good ones. Let's see if the VX500 gets us there.

The new VX500 comes to market in four capacities that range from 128GB to 1024GB (1TB). Toshiba hasn't released BiCS 3D flash in significant volume yet, so we don't expect the VX series to scale beyond 1TB with 15nm planar flash.

The VX500 drives don't hold anything back; users get access to the full capacity of the flash without any hidden spare area held in reserve for background activity. In some situations, like when the drive is nearly full of data, spare area allows the SSD controller to optimize background tasks, which ensures high performance. The VX500, and other SSDs that expose the full LBA range (capacity) to the user, still perform background data activities but leverage the visible capacity that you aren't using.

The 1TB VX500 is the only model to ship with a DRAM buffer, and it only uses a very small 128MB Micron LPDDR3 package. The controller uses on-die SRAM to cache the LBA table for the smaller models. The VX500 can only cache the "hot" portions of the LBA table with the small SRAM/DRAM buffers, so its random performance will suffer.

Toshiba has managed to keep its planar NAND relevant, but it is furiously developing 3D NAND in the background. Toshiba's planar NAND has held a lead over IMFT planar NAND dating back to the 3xnm era, but IMFT is shipping 3D NAND in volume while Toshiba is still using older technology to fight a new war. We've only seen BiCS in one preproduction sample, and the company is already on the third BiCS revision without a retail product to speak of. Toshiba's planar Toggle NAND hasn't suffered the same endurance drop-off as IMFT, so the VX500 still features very good endurance specifications. The 128GB SSD is rated to absorb 74 TB of data writes during the warranty period, but that doubles with each capacity increase and peaks at a whopping 592 TB for the VX500 1TB. That is nearly a 2x advantage over the Samsung 850 Pro.

The 850 Pro supports hardware encryption, which is a feature that both the new VX500 and the SATA performance leader (Extreme Pro) lack. Personally, I don't use full disk encryption, but others need the extra lock on sensitive data. If you fall into the latter category, the VX500 will not satisfy your accelerated encryption needs.

OCZ was aggressive with the VX500 series MSRPs, but the information we have doesn’t reflect the actual price at retail. The series should launch at $64 for the 128GB and range up to $337 for the 1TB. We highlight the 512GB model's performance in this review, and it will come at an aggressive $153 price point. It's roughly $50 less than the Extreme Pro and $90 less than the 850 Pro. The prices are low enough for us to seriously consider the VX500 against the SATA leaders.

This VX500's 5-year warranty is standard for most high-performance models but is still half the duration of the two market leaders. The limited warranty hinges on endurance. The SSD industry has standardized on total bytes written (TBW) to indicate how many terabytes of write data an SSD can absorb. The VX500 series delivers an endurance rating of 74 TB (128GB), 148 TB (256GB), 296 TB (512GB) and 592 TB (1TB) TBW. The high endurance comes from Toshiba's proprietary Quadruple-Swing By Code (QSBC), which purportedly delivers higher endurance than BCH and LDPC (low-density parity check) error correction.

OCZ's warranty program works a bit differently than other manufacturers. The new Advanced Warranty Program differs a little from OCZ's now-defunct Shield Plus, but many of the features carry over. We really like having the extra value-add features in case we need to take advantage of them. I hope that the VX500 is good enough that you will never need free return shipping, advanced replacement or a guaranteed new SSD rather than a refurbished one.

The VX500 Series works with the OCZ SSD Guru software that allows users to perform many common disk-specific tasks. The software supports secure erase, SMART monitoring, firmware updates and more. OCZ also has a command line tool that performs many of the same tasks. Users also gain access to Acronis True Image HD. You have to download the software from Toshiba's OCZ website, and the company includes the code in the paper manuals.

The OCZ name continues to shrink on the package as the Toshiba name increases in font size. The official name of the product is the Toshiba OCZ VX500, which follows the same naming convention as the Toshiba OCZ RD400 we tested a few months back. The VX500 ships with a code for Acronis True Image HD. We found the key in bold lettering on one of the three paper manuals.

The VX500 series is the first OCZ product to take advantage of everything Toshiba has to offer. The company has used this lightweight case for several years on many of its products.

Inside the Toshiba OCZ VX500

The VX500 is nearly identical to the Q300 Pro we tested in July. Toshiba recently transitioned the Q300 series from A19nm NAND to the same 15nm MLC NAND used with the VX500, so they are essentially the same product. The same controller carries over, and it is even accompanied by the same single-sided printed circuit board. The VX500 1TB is the only model to employ a DRAM buffer.

We did not test the 1TB Q300 Pro model, and could not find any documentation that outlined the DRAM arrangement, so DRAM might be the only differentiator between the 1TB VX500 and Q300 models.

We have the three largest VX500 capacities in-house for testing, so let's get to it.