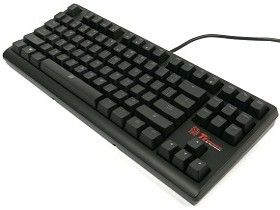 As opposed to the “full” Poseidon Z, the Poseidon ZX doesn’t have a numeric keypad and is consequently 20 percent smaller than traditional keyboards. This can often be a very practical form factor, like when a bit more space for the mouse would come in handy on a smaller desk or when a workstation is limited to a width of 19 inches.

Tt eSports by Thermaltake settled on Kailh switches instead of Cherry ones for the Poseidon ZX. This decision is probably due to price, since the availability of Cherry switches made by ZF Friedrichshafen AG in Germany isn’t really a problem anymore.

You can say what you want about the Cherry knockoffs, but at least they seem to have the problems with the first batches they made under control. We’ll talk about these switches in more detail later in their own section. Suffice it to say here that Tt eSports by Thermaltake has a 5-year warranty on the mechanical switches, which makes the fact that the company didn’t use the original switches a lot less relevant for the buyer.

We’ve received our keyboard directly from Tt eSports by Thermaltake’s headquarters. We’ll take a look if, and for whom, this board makes sense.

Next Page Look and Feel, Usability and Functionality
19 Comments Comment from the forums
Be In the Know