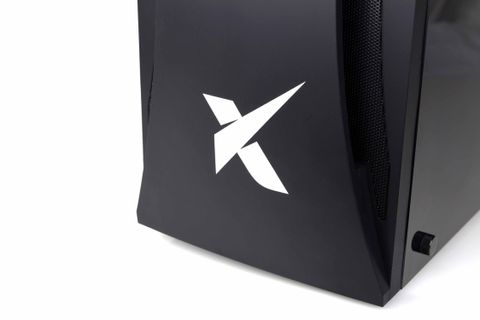 The Xidax X-6 gaming desktop is as malleable as you can dream, with configurations starting at $930 and ranging up to thousands of dollars. The setup we have in the lab is somewhere in between this at $2,094, and it makes short work of many hard-hitting games at 1920 x 1080 and 2560 x 1440 with its overclocked Core i7-7700K and GTX 1070. We aren't fond of a shifting inventory (a few of the components in our review unit have already be replaced) or the low total storage capacity of this particular configuration, but if you aren’t one to tinker with overclocking and want a powerful gaming PC that comes with a lifetime warranty, Xidax would provide exactly that, with as much bling and power as you want or can afford.

Custom PC builder Xidax was eager to send us the newest version of its X-6 desktop, so we configured a new Z270 test bed and put the tempered-glass-adorned gaming rig through its paces. With extras, including LED lighting, sleeved power cables, and overclocked components (CPU and GPU), the Xidax X-6 looks the part of a beastly gaming system, but can the flashy chassis and boosted performance justify a $2,094 price tag on a Core i7 and GTX 1070-equipped PC? Let’s find out.

Xidax has a floating inventory of configurable components, meaning that month to month, or even week to week, the company often changes its configurators to reflect the parts it can currently offer. This mostly occurs with storage, GPU, power supply, and case options, and the pricing for the machines doesn’t vary; if something is on the configurator one day but isn’t the next, it’s usually replaced with an option at the same price.

The same holds true for its cases; the X-6 unit we received features the Xidax Vertex chassis (which is really just a Bitfenix Aurora case), and it’s currently unavailable on the company’s website (however, a white version is in stock). We reached out to Xidax to see what this was about, and we were told that the black version of its Vertex case would return to the configurator once the company gets more stock.

Despite the company’s tricky inventory system, the Xidax X-6 we have is gorgeous. The chassis features a steel and plastic construction, with the top of the case sporting a smooth surface and slim, styled exhaust vents on the lengthy edges of the panel. Tempered-glass side panels on either side of the case give it a sleek look, and the left side panel prominently bears a Xidax logo and gives you a full view of the interior components, made even more visible with the glow of a green LED strip and fans. The glass panel on the right side is tinted dark black on one side (the interior side of the glass) so that you don’t see the cables underneath.

The front I/O resides on the top of the case. There are two USB 3.0 and two USB 2.0 ports, in addition to mic-in and headphone-out 3.5mm audio jacks (one of each). The rear motherboard I/O panel four USB 3.0 ports, two USB 2.0 ports, two USB 3.1 Gen2 ports (a Type-A and a Type-C), and a PS/2 combo port. Although the Type-C interface supports transfer speeds up to 10 Gb/s, Thunderbolt 3 connectivity isn’t part of the package.

The motherboard also features an RJ-45 Ethernet port (powered by an Intel i219-V gigabit Ethernet NIC), in addition to a DVI-D and HDMI 1.4 interface for display output. However, you won’t need the ports on the motherboard for your monitor; the primary GPU provides plenty of display connectivity with DVI-D, HDMI 2.0, and three DisplayPort 1.4 interfaces.

Opening the Xidax X-6 was as easy as it gets, with four thumbscrews (one in each corner) holding the glass side panels in place. We noticed that the chassis becomes a little wobbly once you remove one of the heavy tempered glass panels (the other makes it unbalanced), so it’s best to remove both panels if you want to work on the inside.

With the tempered glass panels removed, we’re greeted by a plethora of high-performance hardware and a handful of aesthetic bonuses. An Intel Core i7-7700K processor is socketed in an MSI Z270 SLI Plus ATX motherboard, with 16GB (2x8GB) of G.Skill Ripjaws V DDR4-2666 memory.

We were hard-pressed to find this motherboard in Xidax’s configurator as we finalized this review; the company swapped it out for an Asus TUF Mark II ATX motherboard for around the same price several weeks ago, after we received our review unit. However, with pricing largely unaffected and these types of inventory changes a regular occurrence for Xidax, we stuck with the previously available motherboard rather than starting over (although Xidax did offer to send us an updated model immediately).

The CPU is cooled by a 240mm Asetek 570LX all-in-one liquid cooler, which is mounted behind a pair of 120mm Thermaltake Riing Green LED fans at the front of the chassis (acting as an air intake). We were somewhat disappointed in this configuration considering that the light is mostly hidden by the solid front panel (which has only thin slits on the sides that act as air intakes). Mounting the radiator directly to the case and putting the fans on the inner side of it would have at least provided light to the interior. As is, the lighting seem to go to waste. Three more of the green LED fans are mounted in the case (two at the top exhaust, one rear exhaust), giving the internal components a gentle green glow and plenty of airflow with a total of five fans.

An MSI GeForce GTX 1070 Aero OC Edition graphics card resides in the motherboard’s primary PCIe x16 slot. It features 8GB of GDDR5 with an effective memory clock of 8008 MHz, in addition to a modest factory overclock. However, Xidax also overclocked the GPU (for an extra $25) to give it even more performance. This GPU should provide impressive 1080p and 1440p gaming performance.

The X-6 configuration Xidax sent us doesn’t have a lot of storage space, with a single 512GB Sandisk X400 SATA SSD (decorated with a Xidax logo) residing in one of the visible 2.5” drive bays. The capacity isn’t ideal for a gaming enthusiast looking to load their entire library into a new PC, but additional storage can be added in the company’s configurator, and Xidax told us it preferred not to include huge HDDs in a review unit “for the sake of it.” It makes sense to us, given that we don’t test secondary storage. We would, however, recommend filling the 3.5” bay at the bottom of the case with some kind of secondary storage. There's also an empty M.2 interface on the motherboard and a 5.25" drive bay, but there's no panel to expose an optical drive at the front of the chassis.

The Xidax X-6 we received gets its juice from an 850W Corsair RM850i 80 Plus Gold certified modular power supply, which is plenty of power for the GTX 1070 and Core i7 platform. It even gives you headroom to upgrade to an SLI configuration down the line. However, you could shave about $77 off the price tag if you go with a 550W PSU, which would also provide plenty of power for the components inside.

Curiously, the configurator no longer offers the RM850i option, replacing it with an RM850X at the same price. The latter doesn’t feature the i-series PSU’s USB connector, which allows the power supply to interface with Corsair Link, the company’s monitoring and control software. However, Xidax didn’t connect or install this feature, and we likely just got the last bit of the company’s previous 850W PSU stock.

The cable management is as good as possible in this chassis, with the main chamber clean of any excess wires and the backside (right side) neatly organized and tied down. The modular cables feeding into the back of the main chamber (right side) of the case are the stock Corsair cables, but they link to green, individually braided cable extensions that plug into the 4+4-pin CPU, 8-pin GPU, and 24-pin ATX power connectors on the motherboard. For an extra $40, Xidax offers a variety of colored cables that can bring a definite wow factor to any gaming PC.

Speaking of aesthetic add-ons, there’s a green LED light strip mounted to the case’s interior ceiling (top panel), and the single strand normally adds another $40 to the bill. Howver, Xidax is currently offering both of these eye-catching bonuses at no charge (so we didn't include it in our total).

The only aesthetic bonus factored into the $2,094 price tag is the green LED fans, which cost an additional $85. It’s clear Xidax chose to showcase most of its mod shop add-ons with the flashy (or static, or breathing) eye-catching options. These add-ons won’t improve your system’s performance (except, perhaps, if the stock fans don’t perform as well as the LED replacements), but it certainly makes the Xidax X-6 look the part of a beastly gaming PC.

Xidax took the liberty of providing an edgy company-centric desktop background for its X-6 gaming PC, but aside from that, there isn’t any “bloatware” to speak of. However, the company did install Chrome, Adobe Reader, and MSI Afterburner (for the GPU overclock), which could hardly be considered bothersome (depending on your feelings about Chrome, we suppose).

The accessory box comes with the motherboard’s user manual and driver disk, along with the power cable and all of the paperwork for your order. Also included is the PSU's extra modular cables and a free Xidax T-Shirt.

Next Page Synthetic & Productivity Benchmarks
3 Comments Comment from the forums