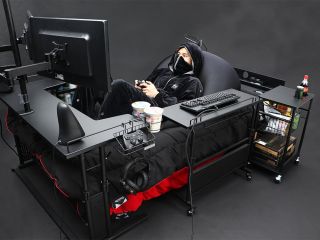 You've heard of gaming chairs, gaming desks and gaming bean bags. But have you ever wondered if it would be possible to create a gaming bed? The folks at Bauhutte, a Japanese gaming furniture company, did. Witness the glory of their creation.

That's right. Bauhutte designed a setup that allows gamers to set up their, well, setups around what appears to be a twin-sized mattress. It seems the days of having to roll out of bed and walk to a desk to play games have finally come to an end.

But that's not all. Bauhutte, like Pepsi and Frito-Lay, knows that gamers subsist on sugar and salt. So the company's gaming bed includes a drink shelf as well as a dedicated snack shelf (with cup holders!) that can be reached with minimal effort.

That probably doesn't sound very ergonomic. Bauhutte thought of that too, which is why the gaming bed concept photos include a bean bag chair that can be used to prop the gamer's spine, neck and skull into a facsimile of a comfortable position.

Even the most dedicated gamers need to take breaks, however, and many decide to spend that time watching their favorite streamers. Bauhutte prepared for that eventuality by including a flexible stand that can hold a tablet above the pillows.

This is pretty much a closed system. (We'll leave the guessing about bodily functions to other websites.) Gamers can sleep, game and watch from roughly the same exact position without having to worry about trivial things like "standing" and "walking."

Bauhutte's setup includes these components, as described by Google Translate:

Bauhutte said the total cost comes to 113,250 yen, which is roughly $1,050. We can only hope that people outside Japan will be able to dedicate themselves as fully to the pursuit of gaming as their Japanese counterparts.