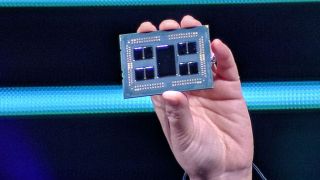 AMD's new Ryzen 3000-series Threadripper CPUs are something to behold, especially the range-topping 64-core, 128-thread Threadripper 3990X. Beneath that resides the Threadripper 3970X with 32 cores, which leaves a glaring hole in AMD's lineup for a 48-core offering.

Even though AMD never confirmed a 48-core Threadrippper 3980X, we've seen claims of the CPU coming before. The latest comes courtesy of Twitter user @NPCdes0, but we're convinced that it's fake.

For starters, in the screenshot the chip reads as the AMD Ryzen Threadripper 3980X at the top, along with core counts of 48 across the board. But down by the Specification line, which is the name CPU-Z reads out straight from the installed CPU itself, it's read out as a Threadripper 3990X. Consequently, it's very possible that the image is either a result of disabling cores or bad editing.

We had an interview with AMD's Robert Hallock in January, and he said that at the time AMD had no plans for a 48-core chip. This was because AMD noticed that with the previous generation of Threadripper CPUs, customers picked either the "sweet spot" chip or the range-topping product, rarely opting for the chip in the middle.

Could We See a Real 48-Core Threadripper?

Still, AMD hasn't completely ruled out the 48-core Threadripper chip entirely. It is very possible that it would still come in the future, as the $2,000 price gap between the Threadripper 3970X and the 3990X is still significant (bigger even than the Threadripper 2990X cost at launch). With its current lineup, AMD could potentially leave a pool of customers interested in a $3,000 chip untouched.

It is possible is that this is an elaborate business strategy from AMD. First, it comes out with the sweet spot chip and then with the high-end product. Holding off on releasing the middle child, could push customers in need of more than 32 cores to splurge on the Threadripper 3990X. So it's feasible that AMD could drop a Threadripper 3980X when Threadripper 3990X sales start to drop.

Either way, at this time we simply don't know whether the Threadripper 3980X will ever become a reality. Anything more is just speculation.