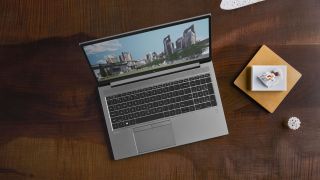 HP has announced its most portable workstation ever, the HP ZBook Firefly, in 14- and 15-inch sizes. The laptops combine Intel's 10th Gen Comet Lake U-series processors with Nvidia Quadro graphics. Both the ZBook Firefly 14 G7 and ZBook Firefly 15 G7 "are expected" to launch in August with a starting price of $1,099.

The two machines have nearly identical configuration options besides the screen size. One big difference is that the 14-inch Firefly can support up to 64GB of RAM, but only with integrated graphics. With discrete graphics, it supports up to 32GB of RAM. The 15-inch Firefly supports up to 64GB, period.

HP's 14-inch laptop starts at 3.1 pounds and the 15-inch device begins at 3.9 pounds. Neither is as small as many of the best ultrabooks on the market, but they are very light compared to other workstations. Both laptops are MIL-STD 810G tested for durability.

For the 4K display options, there's HDR 400 support with up to 500 nits of brightness, which HP says should help in bright environments, like working outdoors.

Notably, the laptops are using Intel's U-series 10th Gen processors, which are less powerful than what most workstations offer (though a key to getting them this thin). HP says that its "HP Z predictive algorithms" will shift power between the CPU and GPU to provide enough power. HP isn't the only one mixing consumer grade chips with Quadro graphics. Microsoft is doing that on the business version of the Surface Book 3.

The ZBook Firefly follows the HP Elite Dragonfly, perhaps the nicest business notebook on the market right now, as HP works on a trend of making laptops that haven't typically been portable or desirable outside of the office easier to carry around and far nicer to use. We'll see how well these fare come August when we can test them.