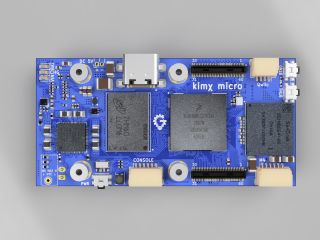 The term “Raspberry Pi Killer” has been used since the Pi first came into existence. Many have tried and failed to take the crown. What is more important than beating the Raspberry Pi, is that there are alternatives to it, and the Kimx Micro (Pronounced Kimchi Micro) looks to add to the long list of Raspberry Pi alternatives, but it offers something a little more interesting for advanced users.

Measuring just 65 x 32 mm the board is only slightly larger than a Pi Zero, but in this diminutive board we have a much more powerful hardware platform than a Pi Zero. The board comes in different configurations with an i.MX8M Mini System on Chip (SoC) offering from one to four 64 bit ARM Cortex-A53 cores reaching speeds of 1.8GHz. Also on the SoC are a Vivante GC NanoUltra 3D GPU and GC320 2D GPU for1080p video encode and decode at up to 60 fps.

System memory is restricted to 1GB of LPDDR4 which may seem meagre, but considering that this is not intended as an educational device, rather something for the more advanced hardware hobbyist, that should be plenty of RAM for most tasks. On-board storage comes in the form of 8GB eMMC flash storage, with additional storage available via a micro SD card slot. An mPCIe socket offers users the chance to add their own connectivity in the form of a WiFi, 4G / LTE or LoRa card. Two 60 pin high density headers offer Ethernet, USB, camera,display, SAI audio, I2C, SPI, PCIe and GPIO access via a breakout connector.

The board is powered using a USB C which also offers USB connectivity for peripherals, but sadly video output is missing from USB C. The USB C port can also be used to charge any LiPo batteries connected to the board thanks to a Power Management Integrated Circuit (PMIC) that monitors the health and status of the battery. This also enables Kimx Micro to be used in portable projects without the need for external PMIC solutions.

This open-source hardware board is still under development but it is great to see the progress of the board being made publicly available. When the board is ready for purchase it will be offered via GroupGets.