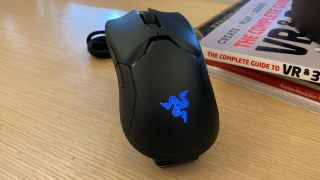 Razer today announced its Viper Ultimate wireless gaming mouse today, and it said in its press release that the device "sets new standards for both accuracy and speed." It's coming out a few months after the original ambidextrous wired model.

Razer said the Viper Ultimate features "a brand new, innovative sensor" called the Razer Focus+ Optical Sensor. The company developed its sensor in partnership with Pixart to offer 99.6% resolution accuracy at a sensitivity of 20,000 DPI and 650 inches-per-second (IPS) tracking speed.

The Razer Focus+ Optical Sensor also includes several "intelligent functions." The first is called Smart Tracking, and Razer said it "automatically calibrates across different mouse surfaces" to offer consistent accuracy. Asymmetric Lift-Off lets users set the distance at which the mouse will resume tracking after it's picked up.

Motion-Sync, meanwhile, "ensures information from the sensor to the PC is set at exact intervals for better sensor responsiveness and improved tracking consistency." That's important for a wireless mouse--the convenience of being wire-free doesn't mean much if the mouse isn't reliable--which is where Razer HyperSpeed+ comes in.

HyperSpeed+ is a proprietary  technology (not to be confused with Logitech G's Lightspeed) that bundles several features to improve wireless connectivity. Razer said it was certified by Singaporean standards tester TUV SUD PSB as "25% faster than leading wireless gaming mice" with the "lowest click latency" and "fastest transmission speed."

The technology is said to offer 25% reduced power consumption (presumably in comparison to Razer's other wireless mice) for "up to 70 hours of uninterrupted gameplay." HyperSpeed+ also uses a feature called Adaptive Frequency Hopping to automatically switch between frequency channels whenever there's interference.

All those technologies are housed in an ambidextrous mouse that weighs 74g--making it Razer's lightest mouse--and features eight programmable buttons. The primary buttons feature optical switches that are supposed to extend the Viper Ultimate's lifespan without compromising on its responsiveness.

Razer said the Viper Ultimate is now available in the U.S. from its online store as well as authorized resellers. It costs $130 by itself, but there's also a bundle with the Razer Mouse Dock available for $150. (The Razer Mouse Dock costs $50 on its own.) International availability and pricing weren't provided.