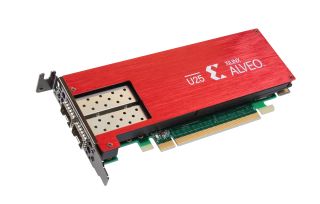 In an announcement on Tuesday, Xilinx says it has launched the industry’s first SmartNIC platform, providing plug-and-play SmartNIC functionality. The company has also unveiled a proof-of-concept for the world’s first FPGA in OAM form factor, and announced an Ethernet adapter in the OCP Spec 3.0 form factor.

With the launch of the Alveo U25 SmartNIC, Xilinx says it has launched the industry’s first SmartNIC platform. It is aimed at cloud service providers, telcos, and private cloud data center operators, delivering convergence of network, storage and compute acceleration functions on a single device

For some background, a network interface card (NIC) is an adapter that provides a connection to the local Ethernet network. Today’s NICs go up to 100Gbps; the next generation will be 200Gbps and 400Gbps. SmartNICs add additional computational capabilities to the NIC, and are mostly based on FPGAs.

Their compute capabilities allow for offloading of tasks that the CPU would normally do, such as encryption, decryption, firewall, TCP/IP and HTTP processing. As such, they can bring greater efficiency and total cost of ownership (TCO) benefits as networking demands and costs increase, eliminating data bottlenecks caused by server I/O.

The first application from the platform with out-of-the-box acceleration (“plug-and-play”) is Open vSwitch (OVS) offload and acceleration. Xilinx says it will offload over 90 percent of OVS processing to improve packet throughput by over 5X. Future turnkey solutions will follow later. Those that are planned include “security functions such as IPSec, SSL/TLS, AES-256/128, and distributed firewall as well as AI inference acceleration”.

The Alveo U25 SmartNIC is sampling with early access customers, and general availability is expected in the third quarter of 2020.

The XtremeScale X2562 10/25Gb Ethernet adapter card is designed for electronic trading environments and enterprise data centers. It has sub-microsecond latency and high throughput with ultra-scale connectivity for real-time packet and flow information to thousands of virtual NICs, according to Xilinx. The X2562 is currently sampling and will be available in the second quarter of 2020.

The proof of concept for the Open Compute Accelerator Module (OAM) FPGA is based on the 16nm Xilinx UltraScale+ VU37P FPGA with 8GB of HBM memory. The the mezzanine-based card is compliant with Open Accelerator Infrastructure (OAI) and supports seven 25Gbps x8 links for rich inter-module system topologies, which is used for distributed acceleration.

SmartNICs are a relatively new but growing market, and Xilinx says it is projected to become a $600 million market by 2024, comprising 23% of the worldwide Ethernet adapter market. They are of interest to cloud service providers as they increase server utilization by freeing up CPU cores for business applications: Xilinx claims that as much as 30% of data center compute resources are allocated to networking I/O processing. They also have much potential from the core to edge of the network.

But Xilinx also says that SmartNICs face challenges from significant R&D investments required to deploy them, and claims that the Alveo U25 platform provides a plug-and-play experience to make them more accessible. This is especially of use for smaller non-Tier 1 cloud service providers and data center operators.

It is not certain if Xilinx’ claim of being the first with a SmartNIC platform is correct: Intel announced its own Cascade Glacier platform based on 20nm Arria 10 in the middle of 2018. The company said at the time that it was sampling and the product would be available in the first quarter of 2019, but Intel hasn’t provided further details since. Napatech claimed in late 2018 the availability of its SmartNIC software for the Arria 10.

In late December 2019, TechTime reported that Intel was purportedly building a new SmartNIC development team in Israel and was looking for a lead performance architect.