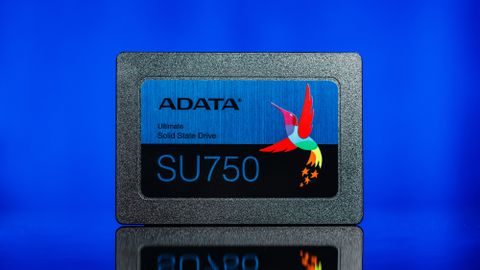 Pitted against Adata's SU750 we have a few of the mainstream SATA options in the marketplace, as well as some cheap NVMe goodness. Crucial’s MX500 and BX500 come into play, both featuring 3D TLC NAND. The MX500 features Silicon Motions SM2258 controller while the BX500 features the DRAMless SM2258XT. As well, we’ve included Samsung’s 860 EVO and QVO SSDs. The 860 EVO features Samsung’s 64L TLC V-NAND while QVO utilizes QLC. And as our last SATA competitor, we’ve opted to include WD’s Blue 3D which utilizes a 4-channel Marvell 88SS1074 4-channel controller and Toshiba 64L TLC flash. Finally, we have the cheapest SSD in the bunch, an M.2 NVMe SSD based on Intel’s latest QLC, Intel SSD 660p.

Unfortunately, the Ultimate SU750 doesn’t do too well. With a total load time of over 28 seconds, it lags behind all competitors in our test pool, save for the HDD.

We use the DiskBench storage benchmarking tool to test file transfer performance with our own custom 50GB block of data. Our data set includes 31,227 files of various types, like pictures, PDFs, and videos. We copy the files to a new folder and then follow up with a reading test of a newly-written 6GB file.

With bandwidth that is 4-6 times that of SATA available to them, it should go as no surprise that the PCIe NVMe SSDs excel during our file transfer tests and take first and second place. The Samsung 860 EVO is the fastest of the SATA bunch, but overall, the SU750 did do well. It outperforms both the Samsung 860 QVO and Crucial BX500 with our 50GB file set and reads at a similar rate as the rest of the SATA SSDs in the test pool.

Under various consumer workloads and applications that PCMark uses, the Adata SU750 again did pretty well overall. While it isn’t the fastest SSD in the pack, it again managed to outrank the 860 QVO and BX500. And to top things off, it nearly matched the performance of the MX500 with a total score of 4,963 points and average transfer speed of 245 MBps.

Like in PCMark 8, the SU750 was able to outrank the 860 QVO in testing, but the BX500 managed to get the upper hand this time around. Installation time wasn’t too far off from the 860 EVO, but it was significantly faster than that of the BX500. With a score of 1543 in responsiveness, the SU750 ranks 7th overall but still proves that it can perform very well under light consumer workloads, especially when compared to an HDD. Although, if you want a better user experience, the Intel 660p, again, looks tempting.

Adata's SU750 peaks at 552/531MB/s read /write in ATTO. However, we can see that sequential performance isn’t very good with small file sizes. From the 2-128KB range, the Realtek DRAMless controller needs a bit more optimization.

The SU750 scored 552/501 MBps read/write speeds under sequential workloads and hit about 83,000 IOPS in both 4K random reading and writing. As well, it hit just over 10,000 read IOPS at QD of 1, which again, keeps it in the lead over the 860 QVO and BX500, but they do offer slightly better writes. Scaling random performance out to a QD of 8, we can see that in read performance, the SU750 is competitive with the lower end SSDs, but random write speed is lacking as the QD increases.

With its dynamic cache cleared, the Adata SU750 does very well in our steady-state write workload, until it runs out of cache that is. Overall, it wrote the second most data up until the 10 minutes mark, 315GB. However, once the cache filled, write speeds dropped to an average of just 70 MBps and there are multiple instances where throughput halts to 0MB/s as it manages FTL processes.

With an average power consumption of 1.95W and maximum of 2.82W recorded during our 50GB transfer, the SU750 proves to be a bit more efficient than the Samsung 860 QVO and Crucial BX500 under load. However, at idle, the difference in efficiency is night and day. The Realtek controller consumes significantly more power than competitors when doing absolutely nothing. With power savings disabled, it consumes a hefty 1.2W and when enabled, things are worse. It draws 13-107x more power at idle than the other SSDs in the bunch.