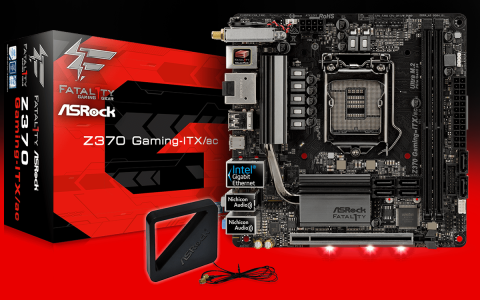 The Fatal1ty Z370 Gaming-ITX/ac broadens the Mini-ITX options for mainstream-CPU overclockers, while adding Thunderbolt 3 to the mix. Still, we suggest buyers choose their favorite Z370 Mini-ITX board based mainly upon what connectors they need.

Intel offers performance enthusiasts a broad range of features in the Z370 chipset, from "Everything can be overclocked!" to "Even the CPU’s PCI Express pathways are unlocked!" But motherboard designers still might feel a little stuck in terms of how to use all those resources on a small Mini-ITX board.

The tight board spacing means that any Mini-ITX board demands compromises. A board that offers support for four DIMMs will mandate using the compact, laptop-style SODIMMs so widely shunned by desktop builders. Otherwise you get two full-size DIMMs, max.

Also, SLI and CrossFire aren’t even considerations on a single-slot board. And, by and large, the option to break out the CPU’s PCI Express lanes to much-faster storage has been abandoned in favor of the single x16 slot having all 16 of its lanes.

What does that mean for Z370 motherboards? Overclocking is now the sole reason to pick a board based on the Z370 chipset versus the H370, and ASRock was determined to make sure they got it right. Did the company succeed, though?

Oh, we get the RGB lighting so frequently seen on big boards, but in a smaller dose: This Fatal1ty-series board has even fewer LEDs than its MSI and Asus Mini-ITX rivals, but it is still equipped with an RGB header to help users who really love motherboard-controlled lighting put that flair into their case. Moreover, the Z370 Gaming-ITX/ac has something those rivals don’t: Intel’s Thunderbolt 3.

But wait, you heard that Thunderbolt 3 was 40Gb/s, right? So what’s with the single 20Gb/s port? It turns out that ASRock used Intel’s two-lane controller to get 16Gb/s of PCIe bandwidth, adding onboard video pass-through to add Thunderbolt monitor capability and bump up the port’s rating to 20Gb/s. That same port also hosts USB 3.1 Gen2 devices, hence it is listed both ways in the features table. The competing MSI board uses a two-lane USB controller to feed two I/O-panel ports, and the competing Asus board uses that same USB controller to feed a single 10Gb/s front-panel port, so that the advantages of ASRock’s chosen controller are decidedly limited.

Z370 Gaming-ITX/ac buyers also get six USB 3.0 ports (aka USB 3.1 Gen1), a pair of Wi-Fi antenna connectors that stick out of the back of a Key-E riser module, a PS/2 keyboard and mouse port, digital optical audio, HDMI and DisplayPort, Gigabit Ethernet, and six analog audio jacks. A CLR_CMOS button makes it easier to recover from a failed overclocking attempt without opening the case of a finished build.

Three four-pin fan headers are spread across the Z370 Gaming-ITX/ac’s top edge, and the RGB LED connector, front-panel USB 3.0 and 2.0, two SATA, and an undocumented UART connector are up front. Though only one of the fan headers can be switched from PWM to voltage-control mode, at least none of the headers is blocked by the graphics card. A beep-code speaker header is the only thing we find under the leading edge of the slot, and hardly anyone bothers to connect those anymore.

Of the four SATA ports located between the memory slots and the PCH heat sink, my installation experience indicates that two will probably be unreachable under an upright single-tower CPU cooler. Oh, and we’d like to wish the best of luck (and patience) to those using these four SATA headers in conjunction with a with low-profile CPU air cooler.

We’d expect any enthusiast motherboard to have at least two M.2 slots, no matter the form factor, but ASRock didn’t find space for a second slot. That’s unfortunate, because one of its two chief competitors, Asus, did. The link between the Z370 and the LGA 1151 CPU socket is only as fast as a single drive interface, but many enthusiasts want a second drive, anyway. A PCIe-to-M.2 adapter could be an even faster option for storage geeks who aren’t using the x16 slot for anything else, but such adapters work equally on competing boards.