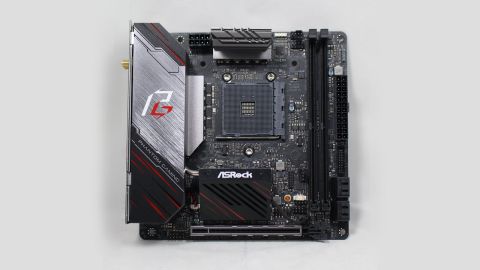 On the software side, ASRock gives users a few useful applications for system monitoring and overclocking with the Phantom Gaming Tuning program, RGB control, and even an ‘app shop’ for easy downloading and installation of ASRock apps and other 3rd party applications.

ASRock’s App Shop is a small-footprint application giving users convenient access to their own apps including the Polychrome RGB LED utility, XFast LAN, Restart to UEFI, and the app charger. In addition to the ASROck apps, some third-party applications including Chrome and Norton Security can also be downloaded from here.

Also within this application, you can access the latest BIOS and drivers for the system. This section displays a list of drivers/BIOS and the current version and shows the latest version available. Simply select which to update (or use the update all function) and it will update your drivers.

Overall, the application was useful for a first-time update situation and its role for one stop updating. I let it update any drivers needed and it was successful in doing so.

Next up is the Phantom Gaming Tuning application. As the name implies, this program is used to tune your system and offers monitoring capabilities as well. It starts off in the Operation Mode screen, which allows users to select between different performance modes, including Power Saving, Standard, and Performance Modes.

Overclocking capabilities are handled in the OC Tweaker section. Here we have access to CPU frequency and voltage, SOC and DRAM voltage, among other secondary voltages. Unlike other similar applications from the board partners, ASRock doesn’t give a CPU multiplier and BCLK adjustments. In order to change the CPU speed you need to enter a specific clock like 4225 MHz. Outside of not having that kind of granular control, the few changes I made with it in Windows (clocks and voltage) worked without issue.

For monitoring, the Phantom Gaming Tuning application lists several domains including clocks, fan and temperature as well as voltages. Here again we do not see BCLK listed, but a simple clock speed. CPU, motherboard and PCH temperature sensors are listed here, along with any fans which happen to be plugged in. We can see the SB fan spinning at over 5K RPM here. Critical voltages including Vcore, CPU VDD, DRAM, and others are listed, along with the three major rails from the power supply.

Last but not least is FAN-Tastic Tuning. This section is where you can apply custom fan curves for each fan. Simply jump in and run the fan test (finds the min/max speeds of the attached fans/pumps), then select the fan you would like to control using the dropdown in the upper left, and tweak to your heart’s content.

Overall, I like the Phantom Gaming Tuning application. It worked without issue in all of its functionality and provides system monitoring. Though it was easy to set clocks, I do wish there was more granularity in overclocking, as in options for a CPU multiplier and BCLK instead of simply entering a clock value. That said,  I can see how this can be better, especially for those looking for a more simple setup.

ASRock’s Polychrome Sync application is used to control the RGB ecosytem on the motherboards as well as any attached compatible devices. It will read your environment and add access to any devices which can be controlled through the software. In total, there are over 15 different preset modes/patterns that can be applied to the RGB lighting. You can also customize the color and speed of many of these modes.

Polychrome worked well out of the gate and for the screenshot you see below. However, upon a reboot and bringing up the application again, it did not recognize the memory and sync it in the ecosystem as it did previously. No system changes (BIOS updates, software updates) were done in the meantime so we aren’t sure what happened there.

Jumping into the ASRock BIOS, we’re greeted by a fairly standard setup with headings across the top and data on the remaining part of the screen. Theme wise, the Phantom Gaming-ITX/TB3 has a mostly black background with a red/maroon accent sweeping in from the center to the upper right corner with any writing in white. One thing that we noticed on this UEFI is the lack of an ‘Easy Mode’. So far, all vendors and boards we have tested so far included one up until now. Outside of that minor quibble, it was smooth sailing all around with this BIOS.

Digging deeper, the first section we’ll discuss is Main. This screen is purely informational, covering the UEFI version, Processor type, speed, and microcode, as well as the total memory installed.

The bulk of the work for an overclocker will be handled in the OC Tweaker section. Here we can find access to the CPU details from SMT modes, memory speed and timing adjustments, as well as voltage functionality.  Like the Windows-based Phantom Gaming Tuning software, we do not find a BCLK or CPU multiplier function in the BIOS, either. In other words, you’ll need to manually input the clock speed in MHz instead of using a multiplier or BCLK value for finer tweaks. Other than that, all of the functions needed to overclock your Ryzen 2/3 processor are located in this spot.

There are plenty of adjustments for DRAM, including all the primary, secondary, and tertiary timings and of course the ability to set XMP mode. Support is listed for DD4 4533+ when overclocking, so there are high hopes from ASRock on its abilities. As we mentioned earlier, the Mini-ITX size boards tend to overclock better due to shorter trace routing and improved signaling. But as always, your mileage may vary.

Inside the Advanced section is where users are able to configure the CPU, Onboard devices (HD audio, WAN/BT, PS/2, etc), storage, as well as having that second AMD Overclocking sub-section we’ve seen in each BIOS so far.

Within the AMD Overclocking area, there is both redundant and more granular options for the DDR and Infinity Fabric, PBO, SOC and other voltages. I find reaching this CPUs maximum can be achieved without going into this section, but it can be useful for other things such as manually configuring PBO options.

The Tool heading is where you’ll find BIOS adjustments for RGB LEDs, SSD secure erase and NVMe sanitization tools. This is also where you can flash the UEFI through Instant Flash.

Inside the H/W Monitor portion, you get a system status of temperatures, fan speeds, voltages, and power supply voltage. Below these readings is where to find fan control. The fans have speed options from silent to full speed, along with the ability to customize and create your own fan curve. Unlike some firmwares, this one doesn’t have a fancy GUI. Still, setting a custom curve was straightforward. Additionally, the board has the ability to select a temperature source to react on, either the CPU or motherboard.

The Security and Boot sections are self explanatory, with nothing sticking out as missing here. If you need to set a system password at the BIOS level, Security is where it is handled. Adjusting anything with regards to the boot process, including boot order, time outs, and fast boot, is located in the Boot section.

The BIOS in ASRock’s Phantom Gaming-ITX/TB3 looks good and worked well for our testing. Outside of the odd lack of BCLK and CPU multiplier control, placement of all the options felt logical and easy to access.