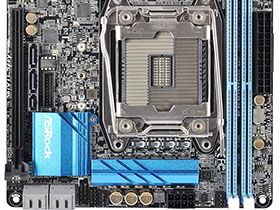 We usually try to put a motherboard up against its peers to determine the best value for the money, but that’s a problem for the only mini-ITX motherboard for LGA 2011-v3. For better or worse, it has no peers. Based on a $250 MSRP, here’s how it compares to its closest rivals.

MicroATX might be a better value, and this is where we’d normally discuss features versus price. Indeed, the X99E-ITX/ac comes with a $30 CPU cooler where the microATX motherboard do not, and has USB 3.1. The X99E-ITX/ac also requires a special CPU cooler though, and your few cooler upgrade options appear slightly overpriced for the money. Moreover, the included cooler’s tiny 60mm/7500 RPM fan will drive you nuts if you like to push a lot heat from your processor. This might be a good time to pine for AMD’s DTX form factor, which would have allowed space for a standard CPU cooler mechanism and four DIMMs. Unfortunately, VIA's mini-ITX won that competition by being first out of the gate.