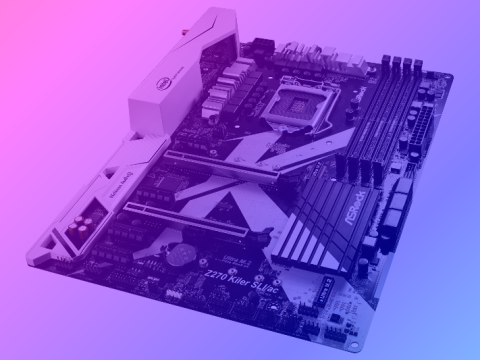 ASRock’s A-Tuning continues to provide full access to the firmware’s range of overclocking adjustments, including Turbo factory-tuned CPU overclocks of 4.6 GHz at 1.35V, 4.8 GHz at 1.38V, 4.9 GHz at 1.40V, and 5.0 GHz at 1.45V. Most of those settings cause our core to heat up faster than we can transfer heat out of it, regardless of cooler capacity. Furthermore, the 4.8 and 4.9 GHz settings come with an offset ratio of -2 when AVX loads are detected, and the Turbo 5.0 GHz setting uses an AVX offset of -3. Evidently, ASRock doesn’t want us to run an AVX-based load at frequencies greater than 4.70 GHz.

Other options include manual overclocking, an automatic overclock and stability test algorithm, and something called Advanced Turbo Gears. Gear 1 matches the Turbo 4.6 GHz setting, and Gear 2 adds DDR4-2400 to the Turbo 4.8 GHz setting. Turbo and Gear settings are firmware based and require a reboot, and automatic overclocking is only available once one of those other settings has been enabled. Auto overclocking backed our CPU down to 4.50 GHz, though at a fixed clock, matching the “Multi Core Enhancement” frequency the board sets for the Core i7-7700K by default.

The Z270 Killer SLI/ac is configured by default to open its firmware with the EZ Mode GUI, which should comfort neophytes with limited options that usually prevent making systems unbootable. It’s still possible to install RAM with an XMP profile that exceeds the motherboard or CPU capabilities, however, and that’s one of the few things that can be set in EZ Mode.

Pressing the keyboard’s F6 key brings users the Z270 Killer SLI/ac’s Advanced mode GUI, where overclocking submenus can be located within its OC Tweaker menu. OC Tweaker also offers the same ASRock-configured overclocking profiles mentioned in the software section above, along with extra space on the firmware ROM to store up to five custom firmware configurations as user profiles.

The Multi Core Enhancement: Enabled setting that appears by default at the top of the CPU configuration submenu disappears when a custom overclock is configured. That’s the setting that forces the CPU to run at its maximum (single core) Intel Turbo Boost ratio even when all four cores are loaded. To maintain a fair comparison between boards that use this overclocking technique by default and those that don’t, we disable it during our standard configuration benchmarks.

The OC Tweaker DRAM Configuration submenu offers a complete range of memory timings and related adjustments. This Z270 Killer SLI/ac is the least expensive motherboard to reach DDR4-3733 with all four of our DDR4-3866 modules installed, which may not sound all that great unless we consider the failings of its mid-priced rivals. Removing two of the modules, the board reached a similarly impressive DDR4-3944 at full stability.

The OC Tweaker Voltage Configuration menu is elegant in its simplicity, including its CPU Load-Line Calibration setting where Level 1 is intended to keep our CPU voltage completely level under load. CPU-Z still indicates that 1.30V core voltage drops to 1.25V under load, but other measurements put the dropped voltage closer to 1.28V. That smaller drop would explain why our CPU reached 4.7 GHz on the Z270 Killer SLI/ac, where several of its higher-priced competitors helped it reach 4.80 GHz.

Unfortunately, DIMM voltage is only configurable in 50mV increments. With an average DIMM voltage measurement that’s 19mV higher than the firmware setting, we had to choose 1.30V (rather than 1.35V) to keep our memory below the 1.355V limit we’ve imposed as a fair testing practice.

Advanced Mode’s Advanced menu offers a setting to enable firmware to boot into Advanced Mode, so that advanced users won’t need to press F6 each time they want to make advanced changes.

In addition to useful tools like an integrated firmware flashing utility, the Tool menu provides Aura RGB color settings, a System Browser function that indicates which hardware has been detected, a UEFI Tech Service email client for outgoing support messages, and Easy RAID installer for pulling drivers from the software media and putting them on a thumb drive. The Aura menu is identical to ASRock’s Windows utility, and the System Browser function is specifically useful in determining that an older component with surface oxide on the connector isn’t being detected (sound familiar?).

As with most mid-priced motherboards, fan voltage controllers are limited to only a single connector on the Z270 Killer SLI/ac. Other connectors are PWM-only. The Fan-Tastic Tuning submenu allows users to configure custom fan slopes.

Prev Page Introducing The Z270 Killer SLI/ac Next Page Test Configuration, Results, And Final Analysis
16 Comments Comment from the forums
Be In the Know