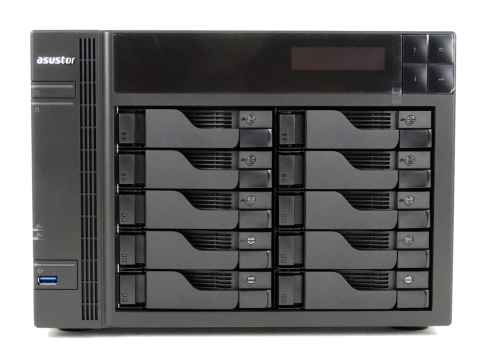 We mixed old and new products in our performance charts to compare and contrast the industry's progress. Even if 10-Gigabit Ethernet is an option on the other products, we test all the systems with a 1-gigabit connection to the dedicated network. We also used the latest supported SMB settings for each system. Older systems do not support the SMB 3 protocol, and that will show in some of the tests.

The QNAP TS-809 Pro represents an older system with a Core2 processor. NAS can run flawlessly for several years, and most of the components are user-replaceable should there be an issue, so there are a number of these systems from this era still in use. The Drobo B810n (for SMB / CIFS tests), B810i (iSCSI tests) and Synology DS1817+ are all very popular new products. The Asustor AS5108T we tested last year allows us to see the progress Asustor made over the last twelve months.

All the systems in this review feature eight drive bays except the AS6210R. We filled the systems with 6TB Seagate Enterprise NAS 7,200 RPM drives and configured RAID 6 arrays with default settings.

Our test system is a modified Quanta MESOS CB220 Cluster-In-A-Box multi-node server. We upgraded the system with two Intel E5-2670 V1 processors and 128GB of system memory per node. An Intel X520 network interface card with two 10GbE ports resides in each node, as well. The system allows us to deploy four test nodes that execute custom software scripts with industry standard test software to measure our base performance metrics. We've updated the system with Windows Server 2016 to utilize the latest SMB protocols fully.

We also rebuilt our synthetic test scripts. The old script would run consecutive workloads with only a small delay between each workload. The new script injects 30 seconds of idle time between each test to allow the NAS's buffers and cache to flush remaining data to the disks.

We use a custom stack of ten dual Xeon servers, with two 6-port Ethernet Hot Lava network cards apiece, to run the multi-client test with up to 120 users. The test runs custom software with Microsoft Office applications. A single client instance will not push the device under test, but multi-user tests can quickly overrun the NAS, resulting in increased latency.

The test system and devices under test connect via a Netgear M6100 fully-modular switch, which provides ample 10GbE and 1GbE ports to sustain our large testing environment.

The Asustor AS6210T rockets through the sequential read workload. The powerful processor and ability to utilize SMB 3 facilitate high-speed data transfers even with smaller blocks and at lower queue depths.

The AS6110T can also ingest data from the network at high speeds. There shouldn't be a significant performance penalty for writing data, even to a RAID 6 array.

Mixed sequential workloads expose significant performance deltas between the systems. The AS6210T performs very well in this test, but so does the Synology DZ1817+, though the AS6210T gives us a more consistent measurement.

At some point, Asustor changed its firmware programming. We usually see the company's products in the same range as the DS1817+ during the random read tests. Asustor ran an aggressive cache algorithm, but we haven't seen it in the last couple of systems we've tested. The system delivers a consistent result, and if you run a virtual machine farm, caching makes a big difference.

The random write performance lines up almost perfectly with the random reads. Again, the AS6210T fell in line with many of the other products and didn't utilize the same aggressive cache we'd seen in previous products with older versions of the ADM operating system.

In case you wonder why we list both 4KB and 8KB random charts, it's because the former is for Windows and Hyper-V while the latter is for VMware EXSi environments. The random sweep test shows us there is very little uptick in random write performance, but at the same time, there is very little drop off as the system deals with incoming and outgoing data simultaneously.

All these systems use software RAID. Using more drives in a single array can have a negative impact on performance because the processor has to manage the redundancy along with the other background and foreground tasks. It's often better to break up a high-capacity system like the AS6204T into two smaller arrays. With this system, two RAID 5 arrays with five disks in each group would be better for disk performance than a single ten disk RAID 6 array. The other systems in this review only utilize eight drive bays, and that's why the AS6210T provides lower performance in many of these intense tests.

The AS6210T operates in the middle of the pack for most of the consumer application tests. The system doesn't break any performance records, but it also doesn't suffer from poor performance syndrome, either. What we see is a balanced machine that is ready to tackle any task.

The lightest workload in the review is oddly also the most intense. Each of the client systems runs a series of typical Microsoft Office files located on the NAS. A single client isn't enough to saturate the NAS, but combining several can overrun the system just like in a typical office environment. Some may look at the throughput to gauge performance, but those who understand this type of environment examine the response time.

The Asustor AS6210T comes close to the same throughput as the Synology DS1817+, but matches it step for step in latency.