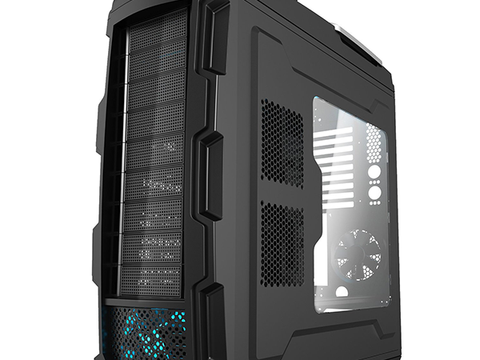 Azza’s GT1 installation kit includes two card braces in addition to the factory-installed pair, a handle for the removable motherboard tray, a pair of additional drive adapters, a pack of screws, a PC speaker and a package of screws with standoffs.

A standard ATX board leaves much room to spare, and the card support bracket can be moved or removed for even large boards. The GT1 main chassis has rails on both sides to accept the motherboard tray, allowing it to be installed traditionally (CPU on top facing out to the left side) or upside-down facing the “wrong way” (as delivered).

Notice that the last card brace is slid to its farthest position with the graphics card “one slot from the top”: The card brace is only able to brace top-slot cards when the tray is re-installed “right-side up”.

Azza still supports AC’97 audio headers, even though every board we’ve seen for the past decade or so has used the also-supported HD Audio standard — better safe than sorry?

We try to test cases in as-delivered configuration, so the GT1 gets tested with the motherboard upside-down. Installing the tray in the other direction would have resulted in the components showing from the other side, but the side panels are swappable to put the window on the showy side.

In addition to the top, bottom, front and rear fans, Azza adds a 120mm fan to the upper mount of the right side. Had we flipped the motherboard and swapped the side panels, that fan would be on the lower mount of the left side.