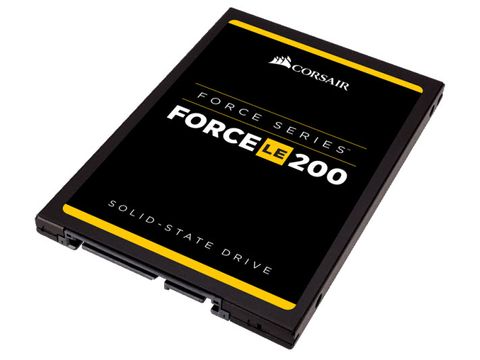 There are only a handful of name-brand DRAMless SSDs on the market. Most of the new products we've seen coming from Asia appear to use the DRAMless design, but none of the vendors advertise the products as such. With brand name companies, you find hints at the underlying architecture. Corsair listed the Force LE200's endurance on the specification sheet, but we've found the rating difficult to find for products from smaller companies.

All the DRAMless drives in our tests seem to be on the level. The SanDisk Z410 and SSD Plus both appeared with the OCZ TL100 in our 11-Drive DRAMless Roundup article. The Hyundai Sapphire 240GB sells for roughly $50.

The Corsair Force LE200 has a shot at the title of the highest-performing DRAMless retail SSD. That is due to the other SSDs having very weak performance, rather than the LE200 being an exceptional SSD. The LE200 delivers strong sequential read performance and can sustain the pace at high queue depths. The single-core SSD controller may suffer under heavier workloads, so we'll keep an eye out for issues during our mixed workload testing.

The S11 controller could suffer from performance issues because only one core manages both foreground and background activity. The Force LE200 240GB provided roughly 500 MB/s of sustained sequential write throughput during our initial tests. This phase of testing follows other tests, so the drive has to manage the incoming data while shuffling existing data. Even after a fairly light workout, performance plummets to 300 MB/s.

The Phison and Toshiba DRAMless controllers have similar architectures, and although the firmware and underlying IP are different, they are very close in many of the tests. Both drives scale well and offer higher random read IOPS than the other DRAMless SSDs we've tested. Queue depth (QD) 1 performance is the important data point here, though. The Force LE200 provides 7,300 IOPS at this critical measurement. That's a little higher than some TLC-based SSDs with DRAM.

The low-QD random write performance is about half that of a similar SSD with DRAM. You will not use the full capabilities during light workloads but may notice slightly higher latency during longer bursts. This could emerge during several real-world tasks when small data writes occur in rapid succession.

The Corsair Force LE200 sports high sequential read and write throughput, so it naturally delivers a solid result in the mixed workload. The OCZ TL100 scores much better, though. A few years ago, OCZ began focusing on mixed workloads and tuning for real-world software rather than benchmarks. That shift just happened to occur after reviewers began testing mixed workloads.

We observe the same general performance profile with the LE200 and OCZ TL100 during a mixed workload. Both drives scale well as we increase the queue depth, but the TL100 has a performance advantage over the Corsair Force LE200.

The DRAMless category is the polar opposite of workstation-focused products. Workstation users are more likely to encounter low levels of steady-state performance. DRAMless drives were not designed for these heavy workloads, and you will experience degraded performance if you use the SSD with a lot of data on the drive.

Unlike many of the other DRAMless products we've tested, Phison's superior firmware keeps the Corsair Force LE200 off the bottom of the chart. This workload is well beyond what the drive was designed for, but we still worry when an SSD delivers zero IOPS. It's important to remember the first consumer SSDs didn't have a DRAM buffer, so they gained a reputation for stuttering and system hangs.

The Corsair Force LE200 performs well against the other DRAMless SSDs, but the results fall well short of traditional SSDs with a DRAM buffer. When the drive wins a test outright, it does so in spectacular fashion. When the Force LE200 loses a test, that is sometimes the case as well.

With the DRAMless drives, inconsistent performance is the root cause of poor performance. Our test runs each application three times and averages the results into a final measurement. With this class of products, the numbers can vary widely from one test to the next.

The important thing to keep in mind is that DRAMless SSD performance is much higher than a hard disk drive. To put that into perspective, the Seagate Barracuda Pro 10TB, the fastest consumer HDD on the market, scores 19.65 MB/s during this test. The Corsair Force LE200 240GB averages 164 MB/s.

DRAMless products are designed for limited writes and light applications. As such, we only focus on the moderate workload chart and the five recovery stages. The Force LE200 outperforms the other DRAMless SSDs in most of these tests, but throughput results are only part of the story.

Many have concluded that the difference in performance between SATA SSDs is minimal. That line doesn't work here. DRAMless SSDs are closer to regular SSDs than they are to hard disk drives, but there is still a very wide performance gap between them and regular SSDs.

Phison controllers ran into a power issue with the PS5007-E7 NVMe, but that didn't carry over to the S11. DRAMless SSDs can provide very good battery life without a DRAM package consuming extra power, but I don't think many DRAMless products have been fully optimized for this purpose. The Force LE200 doesn't deliver the same battery time as the SanDisk SSD Plus, but the previous tests show that the SSD Plus falls short in other areas.