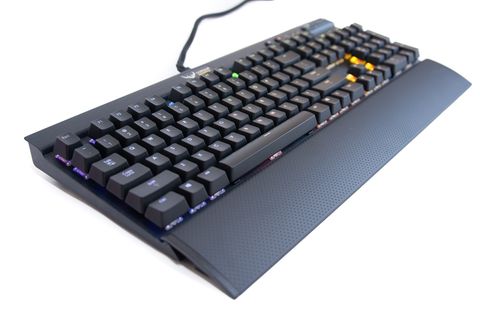 The Cherry MX RGB Red switches on the Corsair Gaming K70 are specially crafted by Cherry to be RGB-lit, and therefore they have a few alterations from the original non-lit versions.

The 16.8-million color LED are enclosed inside the clear upper casing, as opposed to on the surface as seen on older Cherry MX switches. The result is that the entire casing lights up in whichever color the LED produces, and extra light is beamed directly up to shine brightly through the lettering of the keycaps.

This lighting technique itself has an impressive design, but the lights aren't very bright. On top of that, a rainbow of colors appears on the opposing keycap when using white light, which is quite the design oversight for a switch specifically designed for RGB-lighting.

The keypress feedback from the switches remains the same as the older variants. The Red switch is still linear, has an actuation force of 45 g and a 2 mm travel to reach the actuation point, and it bottoms out after 4 mm of travel. Unlike the original Corsair Vengeance mechanical keyboards, all of the switches on the Corsair Gaming K70 are mechanical. The standard K70 and K90 boards had cheaper rubber dome switches placed under the less commonly-used keys such as Esc, the F-Keys and the macro keys.

The media keys are placed at the top right of the keyboard, immediately above the numpad. The first line has a stop button, previous, play/pause, and next button. Above the media switches is a volume roller, which is made of metal and has a pleasing mesh finish on it. The roller sensitivity is not adjustable, but I found that it offers a predictable level of volume adjustment – it’s not too sensitive, nor do you have to roll it endlessly to get to the desired volume.

There is also a brightness adjustment button that allows you to pick from three levels of brightness (or you can turn off the lighting entirely), and there is a Windows-key disable button for when you’re gaming.

On many keyboards, the backplate is mounted down inside a chassis, but Corsair opted to design the Gaming K70 differently, with the backplate set as one smooth piece of 2 mm-thick aluminum across the whole top of the keyboard and the keycaps mounted right on top.

One side effect of this design is that you can see the switch casings below the keycaps. This makes an otherwise extremely clean-looking keyboard look a little messy, and we might consider that a design flaw--if switches didn't light up.

The top panel/backplate is a single 2 mm slab of brushed aluminum that has been anodized in black. The bottom portion of the keyboard case is made of strong ABS plastic, which, together with the strong aluminum slab, means that there is practically zero flexion.

Corsair ships this keyboard with a wrist rest, and a good one at that. Its made of the same strong ABS plastic as the keyboard casing, but the majority of the surface is covered in a rubberized soft-touch material. It is certainly one of the most comfortable wrist rests I’ve used.

The wrist rest no longer screws into the side of the board like on the older K90, and although I thought I was going to miss that feature, I actually didn’t. It never felt like it was about to fall off or break, and the clip-in connectors are strong enough to hold it in place.

The cable is thick, has a braided sleeve from start to end, and feels solidly made. However, in practice, I found that I didn’t like the cable's unwieldy, and it has a tendency to retain its shape. In the box, it came folded (naturally), and the places that are bent were difficult to soften and straighten. As a result, the cable zig-zags across your desk rather than neatly laying itself out. I’d like a slightly more flexible cable.

The K70 RGB has the usual stands to lift the rear of the keyboard, but it also has stands at the front of the board to lift the entire unit.

There is also a BIOS mode slider labeled 1, 2, 4 and 8. Each sets a different polling rate. For example, “1” stands for “1 ms,” meaning a polling rate of 1000 Hz, whereas “8” stands for “8 ms,” resulting in a polling rate of 125 Hz. Not all motherboards support 1000 Hz polling, so you may need to dial down that setting to be able to access and work in the system BIOS.

Prev Page Specifications And Software Next Page Teardown, Performance And Conclusion
11 Comments Comment from the forums
Be In the Know