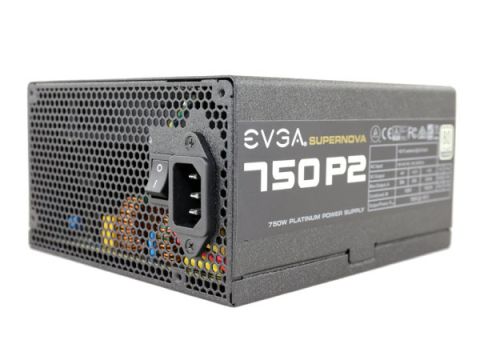 The PSU's box is identical to the ones containing EVGA's 650 P2 and 850 P2, aside from the model name. A small 80 PLUS Platinum badge is in the bottom-left corner. You get some interesting information about the PSU's technical characteristics and features around back. In addition, three small photos depict the APFC's bulk cap, the cooling fan and the modular PCB. On the same side, a diagram shows the fan's operation with ECO (semi-passive) mode enabled.

The contents of the box are neatly arranged, and the PSU is well-protected by two foam spacers. It is also stored inside a cloth bag that has EVGA's logo printed on it.

The bundle includes a set of Velcro straps, four fixing bolts, an AC power cord, modular cables and a pouch for storing the unused ones. In addition, EVGA includes an an ATX-bridging plug for (jump) starting the PSU without a mainboard. Finally, the user's manual is common across the 650, 750 and 850 P2 models.

EVGA's matte coating is one of our favorites since it's resistant to fingerprints and scratches. Overall though, the PSU's design is a bit boring. EVGA is using a very familiar chassis here, and we grow weary of encountering it so often.

A small power switch is installed on the front, next to the AC receptacle. The exhaust grille is a classic honeycomb-style design.

The power specification labels are installed on the PSU's sides. On the bottom, you'll find a sticker with the PSU's serial and part numbers.

Around back, the modular panel includes 12 sockets. Six are set aside for EPS and PCIe cables. Four of the six-pin sockets correspond to the SATA and peripheral cables. And the remaining two are for the ATX cable. You'll also find the ECO switch on that side, which toggles on/off the PSU's semi-passive mode. In our opinion, the switch should be up front where it'd be easier to access.

The punched fan grille is a distinctive feature of EVGA's high-end PSUs. It's not restrictive, and it offers good protection against (and to) the fan's blades. The chassis' build quality is high, easily matching the lofty asking price.

The modular stealth cables feature darkened wires that should be easy to hide inside of black cases. All of the cables (except for the one that holds the Berg connector) are round, which we know some of you won't like. Because the ATX, EPS and PCIe leads use thicker wires, they're not flexible enough for our tastes. As a result, cable management is going to be harder than it needs to be. At least those cables are equipped with filtering capacitors, which provide an extra layer of protection against ripple.

For those of you who want nicer looking cables, EVGA offers sleeved kits. Just be aware that they're expensive and they don't include filtering capacitors like the bundled ones, so ripple suppression will be affected (to a small degree).