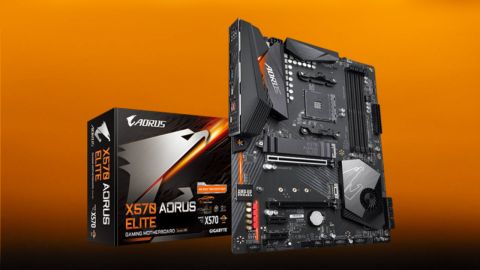 In the Gigabyte software ecosystem, the company offers several applications designed to help the user get more from their PC, and handily stows them all in a single App Center wrapper. From here, you can access Easy Tune, RGB Fusion 2, @Bios, Game Boost, Cloud Station, On/Off Charge, and more.

App Center also acts like a quasi-Windows Settings control panel, with easy access to user account information, firewall, devices, sound, power options and more.  The app itself runs out of the way in the tray until it’s needed. Overall, the software is a good toolbox for accessing the Gigabyte apps and Windows settings, though one thing I would like to see is a driver-updating utility which we have seen in other similar applications from different board partners.

The first application we’ll look at is Easy Tune, which is designed to display system information including temperatures, voltages and clock speeds and fan control. Across the top are several sections, each with different functionality, while on the bottom is live system monitoring.

The first section is OC Smart Boost, with options to overclock the CPU. In this case, default is 3.6GHz on one core) and 3.8 GHz with all cores. In most cases, Precision Boost Overdrive (PBO) will clock past those points, so we suggest using that. In the advanced CPU and DDR overclock portion, users will find all the overclocking options. This includes BCLK and CPU ratio functions, CPU Vcore, SOC and DRAM voltages, among some other lesser options. The DDR portion only offers control for memory frequency and XMP/DOCP profile setups, but no timing control (which should be done in the BIOS anyway). In the advanced power section, we find Load Line calibration for both Vcore and SOC, in case you see a lot of vdroop.

Easy Tune works well as a monitoring tool as well as for overclocking. Some users may not be comfortable in the BIOS and this Windows-based utility is a bit less intimidating when you aren’t used to digging around outside of your OS.

Gigabyte’s RGB LED control application is called RGB Fusion 2.0. This program gives you control over the integrated RGB LEDs on the board as well as any compatible devices you plug into the board, including memory, video cards, and any LEDs attached to the board through its four headers. You’re able to customize the lighting through eight pre-programmed functions, along with the color, speed and brightness.

Moving on to the UEFI / BIOS, there are some slight changes to what I am used to across the top. For example, MIT has been replaced with “Tweaker,” though overall styling and the Aorus theme of Orange and black remain the same.

Starting off in Easy Mode, this section is mostly informative with a bit of editing and interaction allowed. It displays information such as the motherboard name, BIOS version and the installed CPU and RAM amount. There is a section covering the CPU frequency and voltage, along with temperatures of the CPU, chipset, and VRMs. It will also display an installed SATA or M.2 drives, as well as what is populating the PCIe slots.

You’re able to adjust a few things on this screen including setting the XMP profile, changing the boot sequence, as well as access Smart Fan 5 to control your fans. On the lower right-hand side is where one can switch into advanced mode, Smart Fan 5, or Q-Flash, as well as loading defaults, can be done here. Any other functionality will have to come from the advanced sections.

The Advanced mode is where most of the tweaking and overclocking will be handled. Across the top, there are several headings each with specific functionality beneath. From left to right, there’s Favorites, Tweaker, Settings, System Info., Boot and Save and Exit.

The favorites section is a user-customized portion of the BIOS. By default, it includes CPU BCLK and Ratio controls as well as XMP profile and Vcore/Load Line Calibration functions. You can add to this page by pressing the insert key from other tabs to make it ‘yours’.

The tweaker section, or as it was called on X470 based boards, MIT, is where you’ll find all the functionality necessary for overclocking the CPU, setting memory speed and timings and other power type features. For the most part, Gigabyte has done a good job at putting the most-often used options under the same heading. But still, we found ourselves jumping around a bit. There is an entire section for overclocking within the Settings heading, which is mostly duplicated in the tweaker section. I would like to have seen PBO options in the tweaker section, at least.

The System Info. section is informational displaying details on the BIOS, Processor, LAN MAC address and is where to adjust system date and time. You can also reach Q-Flash from here (and elsewhere) as well as get details on attached devices.

The Boot section is where users are able to control the boot options, full-screen logo enable/disable, fast boot and any LAN PXE boot options.

Last up is the Save and Exit section, where you can save any bios changes, load optimized defaults and save and load user profiles.

Jumping into Smart Fan 5 from the BIOS, users are able to create custom fan curves and choose which sensor input the header reacts to. For example, basing the CPU header(s) that off CPU temperatures, and case fans VRM or motherboard temperatures. The point is, you get pretty granular control over when the fans ramp up. This isn’t something you typically see on a budget board.

Overall, the updated BIOS is easy to navigate. But there are a lot of sections with duplicate entries, which can be convenient but also conusing. Overall, the firmware lets you do what you want to do with a fairly easy learning curve. We were able to overclock, for what little that is actually worth, and change settings without issue.