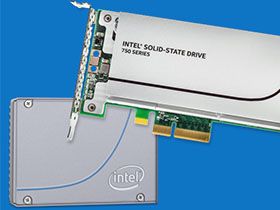 Our sequential mixed workload test with a single worker pushes Intel's 750 Series to over 500 MB/s at a queue depth of two. The drive skips along in predictable increments as we increase the workload's intensity. By QD8 (a valid measuring point for multitasking environments), it steps away from Samsung's SM951, showing this product's datacenter pedigree.

In our random 4KB mixed test, the 750 Series needs an even more demanding workload to distinguish itself from the SM951. With 16 outstanding commands, you push a lot of data to and from the drive, and this workload only comes from professional software environments working with several files at once.

The steady state mixed workload test put the 750 Series behind OCZ's RevoDrive 480GB based on SandForce SF-2281 controllers. That particular processor fares really well in this environment, and the RevoDrive 350 uses four controllers in RAID 0. The 750 Series still tops all other single- and dual-controller products on the market today.

The enterprise lineage really shows in our steady state 100% random 4KB write test. In time, we hope to see a RAID 0 NVMe boot environment that would give this test a little more meaning. Still, the random write results not only represent best-in-class performance, but also the highest consistency.