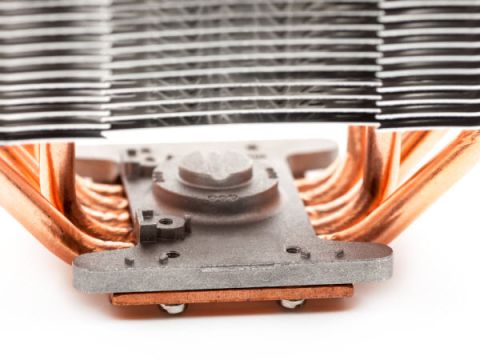 The next cooler in our round-up features a very innovative design not found in many other CPU coolers. The IS-VC45 from ID-Cooling sets itself apart from the other coolers in our round-up with its use of a specially designed vapor chamber in its base, in place of the normal heat pipes. Fundamentally, the vapor chamber operates in the same manner as traditional heat pipes, except it sacrifices a bit of cooling power for a large reduction in the amount of space required to operate. Another advantage of the vapor chamber design is that it's immune to the effects of gravity and can be mounted in any orientation. Finally, even with the slight reduction in cooling power, the IS-VC45 is still rated for CPUs with a TDP up to 130W, which makes this a very promising cooling solution.

At only 45mm tall, the IS-VC45 is the smallest cooler in our round-up and it should have no problems fitting into all except for the smallest of compact cases. The cooler comes in a rather plain box with an instruction manual, 92 x 15mm cooling fan and tensioners, thermal paste, back plate, and four standoff screws for LGA-2011x installations. Unfortunately, for AMD users, the IS-VC45 only supports Intel CPUs in the LGA-115x and 2011x sockets.

The IS-VC45 comes with an extremely flat, finely polished and plated base. The cooler's installation is also the simplest of all of the coolers in today's round-up. Installation is accomplished by applying thermal paste to the CPU, attaching the adhesive backed back plate to the motherboard, and then placing the cooler on the CPU and tightening the four screws that are permanently mounted to the cooler. The installation is then completed by securing the fan to the cooler with the provided tensioners and plugging the fan into the motherboard's CPU fan header.

As with the other coolers we're reviewing today, the IS-VC45 also fits completely within the space provided around the CPU socket, and poses no RAM clearance issues, which are common in larger coolers.

Prev Page Reeven RC-1001 Brontes Next Page be quiet! Shadow Rock LP
21 Comments Comment from the forums
Be In the Know