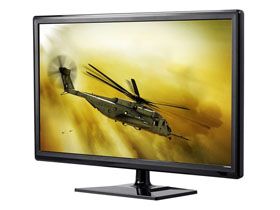 Among 27” QHD gaming monitors, there are none cheaper than the Monoprice MP27 Zero-G at present. Its combination of high pixel density, 144Hz, and FreeSync add up to a good gaming experience at a very reasonable price. It doesn’t feel like it’ll stand up to much abuse but its light weight might be attractive to gamers who travel. And a zero-dead-pixel guarantee means you won’t have to settle for a flawed screen. Monoprice has created an excellent alternative for gamers on a budget.

Although gamers prefer the superior viewing angles of IPS panels, they prioritize resolution and speed more than anything else. And whose shopping list is not arranged by price? Good deals are out there if you’re willing to use a TN panel, and a few companies offer value-oriented displays that boast solid performance.

Since adaptive sync is now a must-have for any gaming monitor, Monoprice has joined the mainstream ranks with a 144Hz FreeSync model: the MP27 Zero-G. It has a 27” TN screen with 2560x1440 (QHD) resolution, plenty of inputs, and a lightweight chassis. Let’s take a look.

With IPS panels firmly entrenched in the high-Hertz, adaptive-sync camp, there are only two reasons to buy a TN monitor: speed and price. The differences are small, but TN still has slightly faster screen draw and sometimes lower input lag than an equivalent-resolution IPS display running at the same framerate. And you can usually expect to pay a little less money. But that gap is shrinking as well.

The MP27 Zero-G keeps its price low by providing just the basics. You get a 144Hz refresh rate without overclock, FreeSync from 40-144Hz, and an HDMI 2.0 input. There’s no blur reduction, nor are there gaming features like special picture modes, FPS counters, or on-screen reticles. And you don’t get USB ports, a fancy stand, or interesting styling. But from a purely functional perspective, the MP27 has everything you need for smooth, tear-free gaming with your favorite AMD video card. And the large FreeSync range means support for Low Framerate Compensation. When the action dips below 40 FPS, the buffer simply repeats each frame to keep the count above 40. In practice, it should eliminate tearing and stuttering, but at QHD resolution, it doesn’t take a lot of horsepower to keep the action humming over 60 FPS.

Users are always looking for a good bargain, and this might be the right choice for those with moderate budgets. Can it perform like its more-expensive competition? That’s what we’re here to determine.

On initial inspection, the carton seems a bit shallow, but once we cut the tape, we discovered the MP27 ships double-boxed. That’s nearly ¾” of cardboard armor, and the monitor is packed in flexible foam, which absorbs vibration and impact better than the rigid stuff we usually see. Assembly consists of snapping the base onto the already-installed upright.

Bundled cables include HDMI only. You can use the HDMI 2.0 input for FreeSync and QHD signals, but we recommend DisplayPort and a quality cable to ensure there are no hiccups at high speeds. The power supply is external and comes in the form of a small brick. Happily, it accepts a standard IEC cord, which is also included. You also get a printed copy of the complete user’s manual.

Our first observation upon setting up the MP27 Zero-G is how lightweight the chassis is. At less than 10lbs, it’s one of the lightest 27” monitors we’ve ever lifted. The panel seems relatively solid with little flex, but the stand is minimal at best. It offers no adjustments save tilt, the fulcrum of which is at the base of the screen. The panel stays where you set it, but the plastic material has quite a bit of give. Even pressing an OSD control button produces a fair amount of wobble. Construction is not something we’d call rugged. But that light weight might be attractive to LAN-partiers. Just treat the MP27 with a bit of care.

The panel has a wide bezel that makes it unsuitable for multi-screen gaming. The dividing line would total almost 2". The bottom edge contains down-facing control buttons for power and OSD navigation. The system is a little awkward, but once you’ve tweaked the image to your liking, you won’t have to use them often. The keys click firmly and should stand up to long-term use. The anti-glare layer has a matte finish like most monitors and rejects ambient light well without imparting any grain or sparkle on the image. The air gap is tight which enhances clarity. Our sample showed no visible backlight bleed or hotspots.

The MP27’s side profile is of average thickness with a slight bulge at the center. It features generous ventilation that is more than adequate to keep the panel running cool. A 100mm VESA mount is provided by four threaded fittings. You’ll have to remove the upright to mount the monitor flush with the wall.

There are a nice variety of inputs, including two HDMI, one 1.4 and one 2.0, along with one each of DisplayPort and DVI. The HDMI 2.0 input works for FreeSync and QHD signals, but DisplayPort offers a more reliable interface. You’ll have to supply your own cable if you want to use it. Audio is supported by an analog input and a headphone output along with built-in stereo speakers that offer surprising volume. The HDMI and DisplayPort interfaces can also carry sound. Unfortunately, there are no USB ports of any kind.