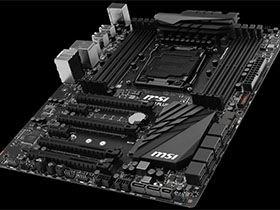 Yes, even the cheapest of Intel’s high-end processors gives us support for three-way SLI, though other boards in the sub-$240 class don’t enable it. While every X99 motherboard can use all 16 lanes from the -5820K on the uppermost slot, MSI is the only company that chooses to untether eight of them for use by the third slot across its entire X99 motherboard series. Even the cheap ones.

The rather clever use of pathway switches even allows the X99S SLI Plus to support three-way SLI and an M.2-interface PCIe 3.0 x4 SSD simultaneously, which I probably only think is clever because it’s the first configuration I thought of when Intel revealed that the Core i7-5820K has 28 lanes. We’ll let you decide whether MSI is brilliant, whether its competitors are a little daft or whether these companies just have slightly different priorities.

Prev Page Introduction Next Page MSI X99S SLI Plus, In Detail
25 Comments Comment from the forums
Be In the Know