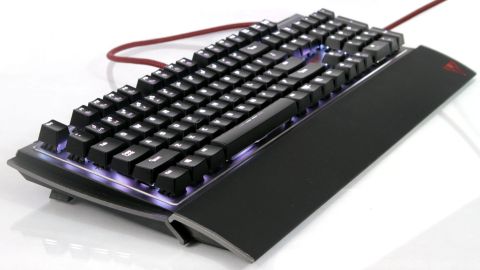 The V760 feels reasonably solid when you type, and that’s due to the aluminum backplate design. The metal is only so sturdy, though; without trying too hard, you can feel some flexion when you pick up the keyboard and twist it. The backplate is rather unique from others you’ll see, as we noted, because although it’s one solid piece of aluminum, the topmost portion of it has a beveled edge. The total thickness of the plate is about 2.6mm, although at the edge, it’s just approximately 1.6mm. The bottom of the chassis is plastic.

The V760 makes use of Costar-style stabilizers. We’ve seen some variation in the quality of such stabs, mainly due to the size of the metal bars. These are relatively thick, though, and I found their performance to be excellent.

Like many top plate designs, the screws on the V760 are hidden by the key caps. Of note, they’re Torx screws (T6, specifically), and there are 11 of them.

Some keyboards come apart easily enough, but this is not really one of them. Patriot clearly does not want you cracking this thing open. And crack it I did--there was at least one small screw under the top plate, holding the top plate to the PCB, and I accidentally broke the plastic housing of it when I was (apparently not so) gingerly wriggling the top plate off.

That is to say, don’t try this at home lest you want to risk bending the top plate and/or voiding your warranty.

Inside, the V760 shows simple construction, in four pieces: a plastic bottom and rubberized plate nestled into it, the PCB, and a metal top plate. (The PCB and top plate are attached, because the switches are plate-mounted.) There’s also a USB assembly on the right side; it’s screwed firmly into place, so it won’t wiggle at all. The USB assembly wire and the wire from the PCB feed into the single cable assembly that extends from the back of the chassis. The cable is held in place by a sturdy, non-removable rubber housing.

Looking at the PCB, note that the MCU is an ARM HSAK3201, and there are four LED controllers (HSAK021). We were unable to locate specifications on either.

The soldering on the PCB is somewhat uneven. There’s a tiny bit of flux residue sprinkled here and there, and many of the welds inconsistent. For example, some are globbed on a little thick, and others show a small amount of sloppiness. None of the soldering appears poor enough to threaten performance or key rollover, but the inconsistency is worth noting.