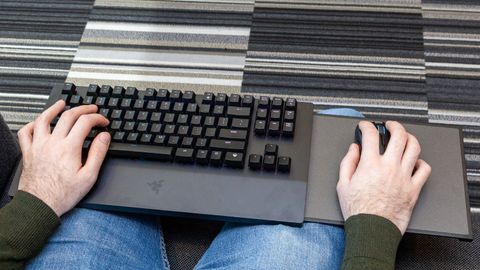 The Razer Turret is a great keyboard and mouse combo for Xbox One and PC, though it needs more Xbox games that support it.

I live in New York City, and my apartment has no room for a desk. For a while now, I’ve been a couch-bound gamer by necessity. And while I’ve tried wireless keyboards and mice, the Razer Turret for Xbox One ($249.99 / £249.99) feels like it hits the sweet spot.

The mouse and mechanical keyboard combo, designed for Xbox One but also functional on PCs, has excellent design, an expandable mouse mat, a full-size mouse and decent battery life. Whether you want to play Xbox One games with a mousepad or just like to game on the couch, the Razer Turret is a premium, purposeful option that can make a couch gamer on feel like they’re being taken seriously.

Razer Turret for Xbox One Specs

If you’ve seen Razer’s BlackWidow keyboard or Mamba mouse, you’ll be familiar with the Turret.

The keyboard aspect of the Turret is much like a tenkeyless BlackWidow but with a number of modifications to get it ready for gaming. It’s far thicker, thanks to both the battery and the addition of a wrist rest built into the black aluminum frame baring the Razer logo. The mid-height keycaps rest on top of Razer’s green switches, which Razer defines as having a “tactile and clicky” feel (similar to a Cherry MX Blue, but with a shorter reset).

There are two ports on the top of the keyboard: a USB Type-C port to charge the keyboard and a micro USB port to plug the mouse into the keyboard for charging. Also on the top are the on/off switch and a status light that shows how much battery you have left.

But the magic is in the retractable mouse mat on the right side of the keyboard (sorry, Southpaws). When you pull a small handle underneath the keyboard, the sizable trackpad slides out. It can slide out just a little, enough for the mouse to be stored when you’re not using it, or all the way for gaming. The trackpad has magnets in it that keep the mouse lightly attached so it doesn’t slide off while you're gaming.

The mouse looks very much like Razer’s Mamba wireless mouse, all-black with a Razer logo. On top are two mouse buttons, a scroll wheel and DPI adjustment buttons. You'll find two additional programmable buttons on the left side of the mouse.

There’s a small compartment on the underside of the mouse to store the 2.4 GHz wireless receiver that you plug into your Xbox One or PC to use the Turret.

Couch Gaming for Xbox and PC

The difference between using the Turret on the Xbox One versus on a PC isn’t that great, which is a testament to Microsoft and Razer’s vision. Once I got into games on my Xbox, I might as well have been playing them on PC, at least as far as controls go.

I spent most of my time on an Xbox One X playing Fortnite, perhaps the most popular of the handful of games currently compatible with a keyboard and mouse on Xbox One (likely closely followed by Minecraft). The game felt like the PC version as soon as I turned it on. It worked seamlessly with a mouse and keyboard. And since Fortnite’s matchmaking pairs keyboard and mouse players with others using a keyboard and mouse, I didn’t have an unfair advantage (it’s a shame, I could use a bit of an advantage).

As a whole, the Turret is really best for shooters, like Fortnite or the first-person pirate game Sea of Thieves, with just two additional buttons and easy DPI switches. It’s also great in games like Warframe, which offers text-based chat. A keyboard delivered a far better experience for me than using the Xbox’s on-screen keyboard.

The biggest limiting factor for Xbox, though, is the small number of games that support mouse and keyboard input at all. Right now, that’s less than 20, even if you count yet-to-be-released titles like Gears of War 5. That’s a lot to spend $250 for right now, but it may become a better investment in the future. The library of Xbox games that support keyboard and mouse input is growing, and major games like Metro: Exodus are slowly adding the feature.

In contrast, the Turret works with every game on PC, period. While Apex Legends for Xbox One doesn’t yet support keyboard and mouse, I played it on my gaming desktop from my couch with no problem. When I went back to see if Anthem had gotten any better (verdict: eh…), it again worked just fine.

Using it on a couch or in a chair just makes sense. There are no feet on the Turret, so playing with it on a desk is awkward. Plus, the non-removable wrist rest is angled in a way that was most comfortable with the keyboard in my lap.

My New York City apartment isn’t big enough for a desk, so my PC is hooked up to my television. I was using the old Turret (it has membrane keys and a half-size mouse) before, and this one is a revelation in comparison. The full-sized mouse is more comfortable and, as always, mechanical keyboards are better than membrane keyboards.

Those who switch between a PC and a desk may consider something like a Corsair Lapdog because it allows you to remove the keyboard and switch between home and desk setups (although the Lapdog doesn’t come with any peripherals unless you pay extra, and removing the keyboard is a complex procedure). But if you’re like me and mostly play on the couch, the Turret is far more comfortable.

For Xbox One, the dedicated Xbox button on the Turret makes a lot of sense because it takes you to the home screen. And Xbox’s menus worked well with the keyboard and mouse (right now it supports navigation with the arrow keys, but that’s really it). But for PC gaming, the Xbox key doesn’t do anything. You can’t even remap it in Razer’s Synapse software, which is a bummer.

While I was pleased with the Turret as a couch gaming peripheral platform, there’s one thing that took getting used to: the magnetized mouse mat. It kept me from dropping the mouse off of my lap, but it took me a bit of time to grow accustomed to the resistance I felt when picking the mouse up and putting it down, even if that force was never enough to mess with my gaming. It was simply an odd feeling.

My only other wish is that the mouse mat area were slightly larger, at least as tall as the keyboard itself.

Over the course of a weekend, I played on and off for several hours without the need to recharge. If you play in bursts, you can easily get a few days out of it. If you play without RGB lighting, that will practically guarantee it.

Based on my time with the Turret, I’d say that heavy gamers may have to charge once every other day, though it really depends on your usage and how you customize the Chroma lighting.

Depending on your platform, you’ll use one of two different pieces of software. On Xbox, it's creatively titled “Razer Turret for Xbox,” with options for creating profiles, mouse sensitivity, RGB lighting for both the keyboard and mouse, plus power and sleep options. And yes, you can navigate the app with the Turret’s keyboard and mouse.

If you’re on a PC, you’ll use Razer Synapse 3. It allows for all of the same customizations as the Xbox app, as well as macro recording, button remapping and access to the Chroma Studio for custom effects.

If you decide to use the Turret for work, you won’t be disappointed. Razer’s green switches are nice and clicky and feel great even just for regular typing. With the keyboard in my lap, I hit 112 words per minute on the 10fastfingers.com typing test with a 1 percent error rate. That’s a typical speed for me, but more accurate than normal.

You could, if you wanted, shut the mouse tray and put the whole thing on your desk, though I found that the angle of the wrist rest makes far more sense with the Turret on a couch than while sitting at a desk.

Razer’s Chroma lighting works just as well on Xbox as it does on PC. With Xbox there are slightly fewer effects and they’re not as customizable. But game developers who build in Chroma support can still offer custom RGB lighting for games.

While I prefer to have some backlighting, Razer suggests you’ll get far better battery life with the lighting off (see the Battery Life section above).

I did have a few missteps with the lighting. Specifically, it often glitched when switching between Xbox One and PC. For example, if I had set a static light to yellow on an Xbox One, then switched to a PC and set it to blue, the keyboard would shuffle between the two. I found if I shut off the Xbox One before detaching the Turret, the lighting tended to work normally when I switched to PC. But additionally, the function row, number row and top letter row would occasionally blink while on PC. This occurred on two separate review units.

This may be a niche case, but if you’re using the Turret for both Xbox and PC, it can get annoying. However, it’s of course possible that Razer could resolve this problem with a software update in the coming weeks or months.

The Razer Turret for Xbox One is an inspired couch keyboard and mouse setup. It’s built solid, the extendable mouse mat is excellent for easy storage, it’s comfortable to use on your lap, and it offers the true feeling of using a mechanical keyboard and mouse -- because you are.

Yes, $249 is a lot of money on top of an Xbox One. The Xbox One S on its own has an MSRP of $299. But buying a mouse and keyboard of the Turret’s caliber separately for a PC wouldn’t be much cheaper than the Turret. I wish the RGB had no hiccups, though I hope that can be fixed through a software update.

Though it’s designed for the Xbox One, the Turret is still a strong option for a PC gamer who plays from the couch. In fact, it works with more games on PC, so it’s really a better deal for those on PC. If you don’t want to slip existing PC mice and keyboards into something like a Corsair Lapdog, the new Turret is a great fit.

Finally, as a couch-based gamer, I feel like I'm being treated as an equal on the peripheral front--but I could still use that advantage in Fortnite.