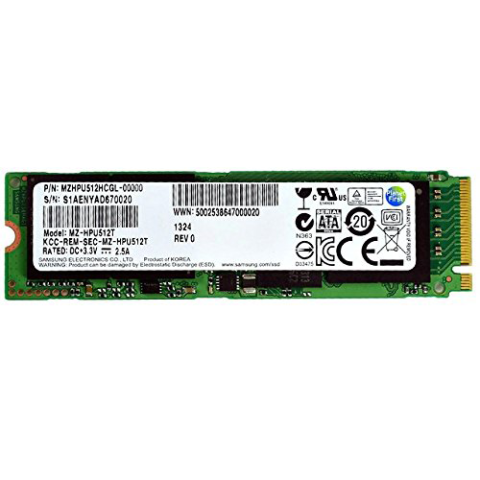 Our Samsung SM951 512GB drive arrived in a Lenovo X1 Carbon Gen 3, so we don't have a retail package to show you.

The notch cut into the lower end of the connector shown above is called a M key. A notch cut out of the top is called a B key. Some products have both M and B keys, but the SM951 only supports PCIe, so it has the M key. Your motherboard or PCIe-to-M.2 adapter will have one or the other as well. It's important to choose the right SSD for your platform, or at least the correct adapter.

With its label removed, we can see the component layout of the SM951 512GB. The drive uses a new controller paired with 16nm MLC flash, both manufactured and designed by Samsung. The company also uses a DRAM package to buffer page table data.

There are four NAND packages on the 512GB version, two on each side. Samsung doesn't put any flash directly opposite the controller. It's particularly sensitive to heat, and writes to flash running outside of a specified temperature range cuts into cell endurance.

The XP941's controller reached as high as 100 °C during long synthetic random write tests. Fortunately, the new UBX controller tames those high temperatures. Samsung does not disclose what lithography node its controllers are manufactured on, but we suspect the UBX employs smaller transistors than the XP941's UAX controller.

Without NVMe, the UBX controller is a generational update of the product it replaces. Both the XP941 and SM951 use the AHCI command set to communicate with the host. The edge connector is also the same, even though the newer model takes advantage of PCIe 3.0. Samsung did initially announce its SM951 as NVMe-capable, but that was later revised down to AHCI for January's release.

This is our first look at Samsung's 2D planar NAND on 16nm lithography. We suspect OEMs didn't want to pay extra for the company's 3D V-NAND technology. The smaller process means that Samsung can produce more die per wafer, a quick and easy way to reduce costs.

This is the inside of the Lenovo X1 Carbon Gen 3. There are three slots for add-in cards. Two are populated, but only one accepts a double-sided storage card. We're testing both SATA- and PCIe-based M.2 cards in the system (the XP941 works in Lenovo's X1 Carbon Gen 3 as well).

Current page: A Closer Look at the SM951