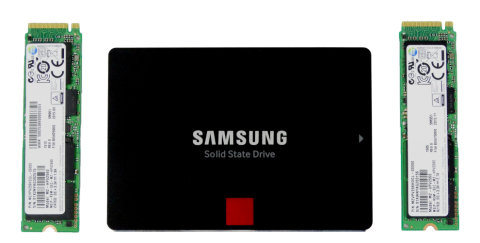 The Samsung 850 Pro is a great SSD, even if the SATA 6Gb/s interface limits its performance. We're confident that 3D V-NAND is capable of delivering higher performance than Samsung's two-bit MLC NAND. However, the controller isn't capable of expressing what's theoretically possible on that bottlenecked interface.

The two SM951 drives break free from the SATA standard introduced all the way back in 2008. In the two charts above, we see that even PCIe-based storage using AHCI, a command protocol introduced with Windows Vista, is a crutch to flash storage devices. Peak sequential read performance is identical between the two SM951 256GB SSDs, but we observed a large divide at low queue depths. NVMe has lower latency than AHCI, and that increases performance when there aren't many outstanding commands.

Most desktop workloads fall into the low queue depth category, and I'd rather see a small speed-up at low queue depths over a large increase at high queue depths. That's usable performance. Perhaps that justifies the SM951-NVMe's added expense, but what does it all mean for Samsung's 850 Pro?

This is why we rarely mix SATA-attached drives into our PCIe-based comparisons. The performance gap is very wide, like comparing hard drives to SSDs. When solid-state storage first emerged, readers wanted to see us compare the technology to the fastest mechanical disks. We are still in a place where enthusiasts need to see the difference with SSDs, even though the gap is massive. Next-generation isn't just a marketing term for the companies manufacturing these parts.