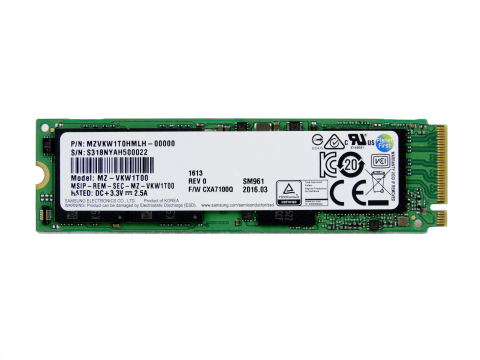 SSD manufacturers quickly adopted NVMe for the enterprise space, but the industry has been slow to adopt the technology for consumer use. There are only four retail NVMe products currently shipping: the Samsung 950 Pro, Intel SSD 750, OCZ RD400 and the Zotac SONIX. The SONIX SSD is not in our comparison charts today (the Phison E7 NVMe controller will receive a new firmware update in the coming weeks that increases performance).

We included the largest and smallest capacity Intel SSD 750 NVMe Add-In Card (AIC) SSDs in the test results. You can read about the mid-range 800GB drive here.

Even as an OEM product, the Samsung SM961 is a direct competitor to the Samsung 950 Pro because both SSDs feature the M.2 form factor and slot into desktops and high-performance notebooks. We included both existing 950 Pro capacity sizes. Samsung relayed to media that a larger 1TB 950 Pro would emerge in early 2016, but it has yet to launch and the SM960 throws its eventual arrival into doubt (at least as a 950 Pro). Some have speculated that Samsung will release a new 960 Pro with the new Polaris SSD controller later in 2016.

We also included the 480GB Kingston Predator in the tests. The Predator employs a Marvell PCIe 2.0 x4 flash controller and serves as a representative of the previous generation M.2 SSDs that utilize the AHCI protocol.

The Samsung SM961 1TB rocks the competition right out of the gate. We measured the queue depth 1 sequential performance at 2,100 MB/s, and at one point, we recorded a QD1 transfer at just under 2,500 MB/s. To put this into perspective, that is the same performance you would get with a dedicated enterprise RAID controller and five to six high-quality SATA 6Gbps SSDs running in RAID 0. Sequential QD1 throughput at 2,500 MB/s is one of the wild-wild west numbers, and gitty-up is all I have to say.

The SM961's sequential writes take off like a rocket ship. The SM961 delivers 300 MB/s more than the 950 Pro 512GB at QD2, and it doesn't let up. NVMe SSDs don't scale as well as we increase the queue depth during the test.

The OCZ RD400's test results indicate inconsistent performance, but the values are not a result of the queue depth load. The RD400 is thermal throttling from the heavy and prolonged workloads. We tested the drive for throttle issues under more realistic conditions and did not find an issue.

Most SSDs, including many consumer 2.5-inch SATA products, will throttle during prolonged write workloads. During normal desktop use, the random data comes in short bursts that do not trigger throttling, or the effect goes unnoticed. Some of the early PCIe SSDs were prone to throttle issues while transferring large sequential files in rapid succession. Many of the user complaints about thermal throttling are triggered by running intense benchmarks rather than real world use.

We tested the SM961 both with and without an Angelbird Wing PX1 heatsink during a similar sequential data test. We zoomed the chart axis in on the results to provide more granularity. The test consisted of 128KB sequential writes at a queue depth of 1 over a 30 minute span, and the Samsung SM961 1TB began to throttle performance after several minutes of writing data. The performance continued to degrade, and after roughly 15 minutes, it become erratic as the controller began dynamically throttling the Polaris controller to regulate its temperature.

The Samsung SM961 delivers the highest queue depth 1 random read performance we've tested on a consumer SSD. The SM961 is only slightly faster than the 950 Pro 512GB at low queue depths. The SM961 plateaus while many of the other SSDs continue to scale at high queue depths. This is outside of the realm of normal consumer workloads, but it indicates the limits of the Polaris controller with standard queue depth scaling. The SM961 can achieve higher results by taking advantage of the advanced NVMe command queues and deeper queue depths, which are often exposed by multiple workers (threads) generating I/O commands.

The SM961 is slightly slower than the 950 Pro SSDs at a queue depth of 1, but it outperforms both 950's as the queue depth increases. However, the Intel 750, and even the OCZ RD400, deliver higher random write performance.

Prev Page Specifications, Pricing, Warranty And Accessories Next Page Mixed Workloads And Steady State
28 Comments Comment from the forums
Be In the Know