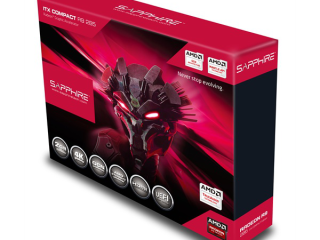 A tiny, high-performance gaming PC sounds like an oxymoron. Nevertheless, the LAN party subculture covets small form factors packed with as much computing muscle as possible. It must be how some automotive enthusiasts feel when they see a big V8 shoehorned into a compact car: it might be tacky, but there's something cool about it, too. It's the kind of hardware that's worthy of an approving nod to other enthusiasts who appreciate its merits.

If you're building your own mini-ITX system with limited space for a graphics card, small versions of the GeForce GTX 760 used to be the best  you could hope for. But now Sapphire offers the ITX Compact R9 285 OC Edition. It's a Radeon R9 285 compacted down to a svelte 170mm-long PCB, which is small enough to fit in the vast majority of mini-ITX enclosures. For comparison's sake, the Radeon HD 7970 reference board measures 240mm long.

The card's most prominent feature is a polycarbonate shroud with metal-plated accents and labels calling out its compact status. The brushed metal and black PCB impart a classy look. Despite its short length, Sapphire's circuit board measures a full-height 117mm, and the cooling solution populates two expansion slots at 37mm thick. It feels surprisingly heavy for its size at 592g, though it's lighter than the reference Radeon HD 7970's 866g.

Despite more compact dimensions, Sapphire delivers the card with a mild core overclock of 928MHz, although the GDDR5 memory operates at AMD's standard 1375MHz. You get 2 GB of RAM, which is standard on the Radeon R9 285.

The heat sink's fins are aluminum. They dissipate heat after it's transferred through four copper pipes, two of which are 8mm in diameter; the other two are 6mm pipes. A single 85mm fan keeps the air flowing and temperatures in check.

Note the single 8-pin PCIe connector, which can carry up to 150W of power. It's essentially equivalent to the two 6-pin auxiliary inputs on the reference card, designed to carry up to 75W each. We therefore expect Sapphire's ITX Compact card to demonstrate consumption characteristics comparable to other Radeon R9 285s on the market.

Like the Radeon R9 290 and R7 260, the Radeon R9 285 doesn't need CrossFire bridges to render cooperatively. Instead of CrossFire bridges on top of the board, there's a Dual BIOS switch that lets you choose either legacy or UEFI compatibility mode. As an added bonus, it provides a measure of safety for those who like to tweak their cards with a ROM flash.

The well-appointed bundle includes a 6' HDMI cable, a dual-6-to-8-pin PCIe power adapter, manual, registration card, driver CD, case sticker, DVI-to-VGA adapter and mini-DisplayPort-to-DisplayPort adapters. There is also a thin mouse pad included, something we are surprised to see in an age where value-adds seem to have gone out of style.