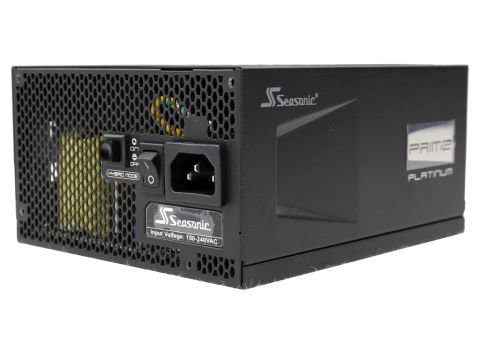 The hold-up time we measure lasts more than 31ms. And the power-good signal is pretty long as well. Plus, it's accurate.

The registered inrush current with 115V is very low, while it's normal with 230V (given this PSU's high-capacity bulk caps).

The first set of tests reveals the stability of the voltage rails and the SSR-1000PD Ultra's efficiency. The applied load equals (approximately) 10 to 110 percent of the PSU's maximum load in increments of 10 percentage points.

Load regulation on the +12V rail is jaw-dropping! The other rails are pretty awesome as well, but they don't quite hit that +12V rail's superb levels.

When it comes to efficiency, Seasonic's SSR-1000PD Ultra satisfies the 80 PLUS Platinum certification's requirements with 20% and 50% load, but falls short under full load. Of course, we perform this test at high ambient temperatures, whereas 80 PLUS benchmarks at room temperature (23°C +/-5°C).

The fan profile is relaxed up to our 60% test. But once the load hits 80% of this PSU's maximum-rated capacity and the ambient exceeds 42°C, the fan starts spinning very fast, generating lots of noise. Under full load, the fan is disturbingly loud, reaching 52 dB(A). At that point, it's difficult to tolerate. We should note, though, that during those final load tests (9-11), we're pushing our test subject hard in a hot environment. It's only natural that the fan kicks in to keep the internal temperature as low as possible to prolong the PSU's useful life.

Prev Page Teardown & Component Analysis Next Page Efficiency, Temperature & Noise
3 Comments Comment from the forums
Be In the Know