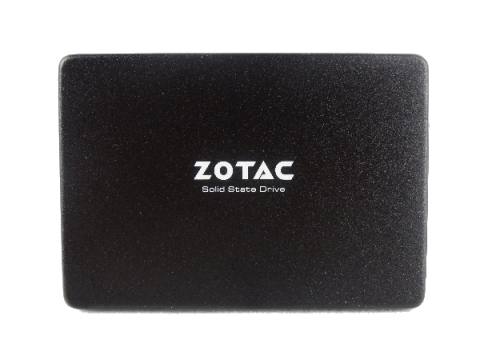 The new 1.6 firmware juggles incompressible data a little more adeptly than previous builds we've tested. Most of our tests use this type of data, so you will see the Premium Edition SSD move up the performance charts in most of our metrics compared to products we tested previously based on the same controller.

One thing that hasn't changed is the S10 controller's ability to read sequential data very quickly. We've yet to test an S10-based drive paired with MLC flash that didn't dominate this benchmark. Even at low queue depths, the quad-core controller extracts a lot of performance from the flash.

When we previously measured the sequential write speed of S10-based drives, they always showed up around the top of the charts. Phison's newest firmware pegs Zotac's Premium Edition SSD at the top, though. Gamers looking for shorter level load times will benefit from these high sequential read and write numbers.

Both the 240GB and 480GB Premium Edition drives deliver nearly identical performance through both sequential tests. These are the first low-cost SSDs that keep pace with Samsung's 850 EVO. Even more impressive, the 240GB model manages to outperform many of the higher-capacity drives we're comparing it to.

Historically, Phison controllers ran into issues working with small blocks of data. And randomly-accessed information is almost exclusively in small blocks (at least in Windows). When we test SSDs and separate them into performance classes, we use random read performance at a queue depth of one as our scale. Any drive that scores less than 7000 IOPS falls in the lower end of the scale, where you find budget-oriented products. The middle tier ranges from 7000 to 9000 IOPS. Any SSD capable of delivering more than 10,000 IOPS is special indeed. Very few SATA-attached SSDs can do this. Even PCIe-based SSDs often have trouble crossing that threshold.

Zotac's Premium Edition SSD makes it into our exclusive club, though. This is the level of performance we've always expected from the quad-core S10 paired with MLC flash. After a year of work under its hood, the controller now lives up to our expectations. What surprises us is that the S10 delivers so much performance over AHCI, rather than an NVMe interface.

The Premium Edition SSD's random write performance is also very high. Again, we see the Zotac SSDs on equal ground as Samsung's 850 EVO. It's easier to realize higher queue depths during random write operations than random reads. Because of that, we look further up the queue depth range, where we find the Premium Edition SSDs comparable with the 850 EVO 500GB once more.

The SATA bus is half-duplex, so it can read data or write it, but it can't do both at the same time. With one read and one write in the queue (represented by QD2 in our chart), Zotac's two Premium Edition SSDs operate at the same rate as the Samsung 850 EVO. As you stack more commands, the 850 EVO 500GB performs a little better until a queue depth of 16, where the Premium Edition drives gain an advantage moving 128KB blocks sequentially.

The sequential steady state test shows that Phison has the S10 firing on all cylinders. The company always planned to take this controller to the enterprise market in some form, and firmware is key to making that happen. As the firmware matures to address those higher-end requirements, client SSDs with the same controller hardware will benefit along the way.

High sequential steady state performance is ideal for a few different applications. Most of us will never get into steady state unless the drive fills up. Audio and video production can get down into this state, too, but only after hours of heavy writes to the drive.

Random small-block steady state only really happens in the enterprise, and almost exclusively on database servers. We use this test to look for performance consistency. When SSDs achieve high and consistent performance, they are better at operating in RAID arrays.

The Zotac Premium Edition SSDs deliver a bit more than 2500 random write IOPS on average, though they demonstrate several peaks. As it sits right now, this budget SSD doesn't have what we like to see for RAID configurations. The upcoming 2.0 firmware is supposed to address the low steady state write IOPS performance and deliver higher consistency.