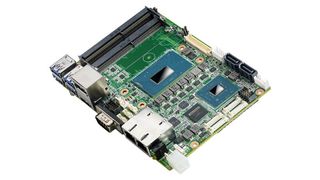 Squeezing a 9th Gen Intel Xeon/Core based computer into a package 5.78i by 4.01in (146 by 102 mm) is no small feat but Advantech who are a provider of IoT (Internet of Things) and embedded platforms have done just that and released the 3.5” SBC MIO-5393.

To cut to the chase, this is not a “Raspberry Pi killer” the two boards are focused on different users and markets. The MIO-5393 is offered as a micro server / kiosk platform for industrial use or scenarios involving demanding environments, but this board could be easily used in the home if that were your wish.

The MIO-5393 comes in four configurations, each with a CPU ranging from an Intel 8th Gen Core i5 8400H to a Xeon E-2276ME. Each configuration can use up to 64GB of DDR4-2400 (ECC for the Xeon model) and thankfully RAM is easily upgraded by the user.

As standard there is no wireless connectivity but there are two M.2 expansion slots which can be used with WiFi and 4G / LTE modules. Wired network connectivity is provided by two Gigabit Ethernet ports. An RS232/422/485 port is on hand in case an external serial connection is required. Audio is supplied via a Realtek ALC888S chipset, and instead of built in audio ports an audio cable is used to break out the connections from the board.

This is a lot of power for such a small board, and this is reflected in the price, which is available on request from Advantech.