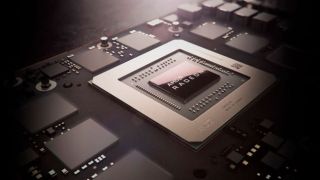 According to one Redditor, whose post was subsequently deleted, the specifications for a Radeon RX 5600 XT were posted for a brief moment, revealing some possible details about AMD's unreleased graphics card.

*Specifications in the table are unconfirmed.

The Radeon RX 5600 XT allegedly operates with a 1,235 MHz base clock, 1,460 MHz game clock, and 1,620 MHz boost clock. The graphics card was apparently listed with a factory overclock so it's impossible to guess the reference specifications for AMG's GPU at this time.

The description, which reportedly appeared on ASRock's website, didn't specify the graphics card's TDP (thermal design power), but given the lower clock speeds, it should consume less power than a Radeon RX 5700.

The leaked card reportedly measures 240.6 x 126.5 x 53mm. It is said to sport one HDMI 2.0b port and three DisplayPort 1.4 outputs with DSC 1.2a support. This is the same configuration of display outputs on the vanilla Radeon RX 5700.

Theoretically, you can downclock a Radeon RX 5700, and it would be a pretty good representation of the performance that you could expect from the approaching Radeon RX 5600 XT. Either way, you should still wait for our in-depth review.