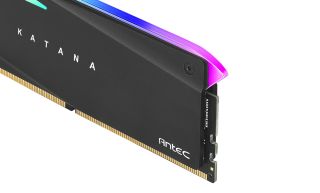 Antec has had a reputation for making some of the best PC cases over the years. And while the vendor still makes chassis, as well as power supplies and cooling products, it's having a go at making the best RAM too. This week, Antec introduced the 7-Series Katana DDR4 modules, as spotted by TechPowerUp.

The new RAM sticks have black PCBs covered with black aluminum heatsinks, which have the word Katana subtly written on them. Antec's product page for the Katana kits nods at Japanese samurai swords and says the 7-series was inspired by the weapon's silhouette. The vendor uses CNC machining to give the RAM its blade-like look.

Samurais never rocked RGB though. Antec tops its 7-Series Katana RAM off with smooth RGB. The lighting is compatible with Asus Aura Sync, MSI Mystic Light Sync and ASRock Polychome Sync, so you can sync up RGB with your motherboard.

"With our Katana memory modules, Antec aims at enthusiasts buying their stylish gaming cases and looking to add stylish designed components by the same brand," Eric Chen, Antec's VP, said in a statement.

Antec hasn't revealed pricing for the RAM kits yet.