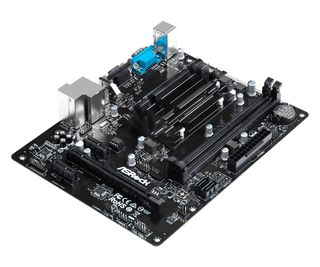 Hardware finder @momomo_us has uncovered a new AMD motherboard that ASRock quietly added to its product catalog. The QC6000M proudly sports AMD's E2-6110 APU (Accelerated Processing Unit), which launched in 2014. The APU is certainly old tech, but it's powerful enough for many use cases, including embedded ones, and is extremely cheap.

The ASRock QC6000M is a standard micro-ATX motherboard that's carved out of a sleek, black PCB. The E2-6110 (codename Beema) is at the heart of the QC6000M. It's a quad-core 15W APU that's based on the Puma microarchitecture and ticks with a 1.5 GHz base clock. The E2-6110 is equipped with AMD Radeon R2 graphics, offering 128 shader cores clocked at 500 MHz.

The motherboard comes with two DDR3 memory slots. It supports DDR3-1600 memory modules and can hold up to 32GB of memory in total. The QC6000M only provides two SATA III ports for storage, and expansion options are limited to a single PCIe 2.0 x16 slot and two PCIe 2.0 x1 slots.

The ASRock QC6000M has yet to arrive to U.S. retailers. However, the motherboard is being sold overseas for around 65 euros and, given today's exchange rate, that converts to $71.