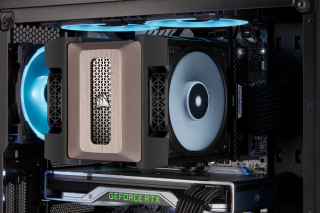 At CES 2020 Corsair has announced its latest foray into the world of CPU chilling in the form of its A500 dual-fan CPU cooler. This high-performance $100 CPU heatsink, packs in twin Corsair ML120 magnetic levitation fans, operating between 400 and 2400 RPM, drawing air across a highly dense tower supported with a copper “quad direct-contact” heat pipe design.

The dark brushed aluminum tower also features a “ratcheting slide-and-lock fan mount” system which enables you to adjust fan height to improve DRAM compatibility. According to Corsair the A500 is impressively easy to install and is also compatible with AM4, AM3, FM2, LGA115x and LGA20xx CPUs, although sadly no support for the sTR4 platform.

Additionally Corsair is also launching updated skus of its AIO lineup, with the H100i, H115i and H150i RGB PRO XT series liquid-coolers, at 240mm, 280mm and 360mm respectively. Similarly to the A500, they all come packing either 120mm or 140mm variants of Corsair’s impressive ML magnetic levitation fans to provide some serious static pressure grunt. In fact, it makes the H150i RGB PRO XT the best performing AIO the company currently has on offer thanks to the increased radiator surface area working in conjunction with those three 120mm fans.

Of course, you also get the usual sleeved tubing, and complete compatibility with Corsair’s iCUE software suite, with 16 individually addressable RGB LEDs baked into each CPU block as standard.

The Corsair A500 and all of the RGB PRO XT AIOs are available now worldwide.