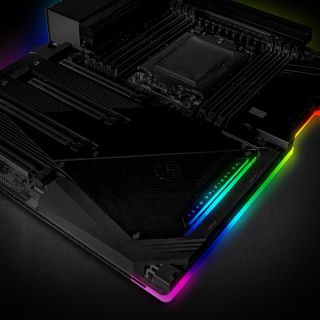 Gigabyte South Africa has revealed an image of a new Threadripper motherboard, which is likely part of the Threadripper 3 launch in November. Threadripper 3 boards are rumored to use the TRX40 chipset and even a new socket (which is expected to be physically identical to the TR4 socket, but different nonetheless). This board from Gigabyte is almost certainly one of the high end offerings, likely an AORUS or a motherboard more in line with a workstation-focused brand.

From the image, we can see four full-sized PCIe brackets (all of which are reinforced), three M.2 ports all equipped with heat shields, a debug display, robust passive cooling for some of the VRMs, and everyone’s favorite X570 feature, the chipset fan. Just by looking at this board, it’s pretty obvious it’s going to be one of the most expensive ones available.

The chipset fan is interesting because that would imply that TRX40 is using the same chipset as X570, which is also the same silicon that AMD uses for the I/O die inside Ryzen 3000 chips. One of Twitter’s best known leakers, @KOMACHI_ENSAKA, commented on the fan saying, “Well, basically it's the same “AMD Premium (2019) Chipset” as the X570, so it will need a chipset fan.” According to him, the rumored TRX40 chipset and the X570 are likely one in the same.

While this is hardly confirmation, it would explain the chipset fan. It’s also interesting to note that Threadripper 3 should get the Epyc I/O die (which is over 400 mm2); Threadripper 3 and its TRX40 chipset should be an interesting combination if these assumptions are correct. But when it comes to PCIe lanes, the CPU itself will be doing most of the heavy lifting; the chipset will probably only provide more USB connectivity, some SATA ports, and a few more PCIe lanes.

VideoCardz previously reported Threadripper 3 and its motherboards would be revealed on November 5 and would launch on November 19, save for one CPU which the publication believes to be a 64 core processor. That one will apparently launch in January of 2020. AMD says Threadripper 3 is slated for November; let’s hope it hasn’t been delayed.