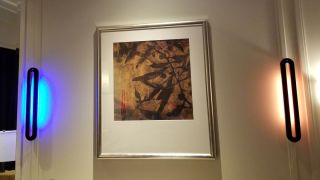 If you have RGB LEDs in your PC and on your peripherals so why not deck the walls with custom-colored lighting too? iBuyPower, an OEM known for its high-performance and customized gaming PCs, is entering the light business, launching its own set of programmable ambient lights. Due out in June at a price of $149 for a set of two or $299 for a five-pack, iBuyPower's lights can change color based on the content you're viewing or perform all kinds of special effects shows.

Some smart home vendors such as Nanoleaf and Philips, with its Hue Sync, have developed colorful ambient lights that react to the content of your games and videos. However, iBuyPower's offering stands out because it's being developed and marketed by a real PC gaming company.

iBuyPower's lights have 60 addressable LEDs each, allowing them to create animated RGB effects.  You can control them using either a smartphone app or software from your computer.

If you are using the WIndows application, you can have the lights change color based on what's happening in the content on screen. In a demo at iBuyPower's CES 2020 suite, company reps showed how three lights, positioned to the left, behind and to the right of a TV set, changed color to match the video that was playing on just their side of the screen. So, if you're playing a game with blue water on the right and orange fire on the left, the lights will match up. At least at launch, this feature will only work if the screen is connected to a PC.

There's also a mobile app, which allows you to control and start custom light shows from a phone or tablet. If you have multiple lights on different sides of your room, you can make them show an animation that makes it look like light is moving from one to the next.

Physically, the ambient lights are thin and oval-shaped, measuring 23.6 x 3.9 x 1.2 inches (600 x 100 x 30 mm) and come with mounts so you can hang them on a wall. An iBuyPower rep said the company is also considering other sizes and shapes for future launches. The company had a rectangular ceiling light on display, but said that it isn't going to be released because it's difficult to mount and run a power cord down from the ceiling for most folks.