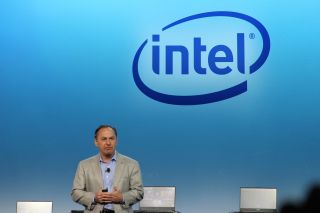 Intel released its quarterly earnings today with an unexpected bit of good news for the chipmaker: It plans to release its 10nm+ Tiger Lake chips in the middle of 2020. The company also weathered the opening stages of the coronavirus pandemic with surprisingly robust results as it notched another blowout quarter.

The world truly needs silicon more now than ever. In fact, that's one of the few certainties as a large portion of the global population remains sequestered and adjusts to the realities of remote work during an unprecedented pandemic. Given that Intel claims its silicon runs 95% of the world's internet communications and governmental infrastructure, we'd expect the massive societal shift to benefit the chipmaker, at least in the short term.

According to the company's first-quarter 2020 financial results, the pandemic did just that. Intel raked in $5.7 billion in Q1 profit, a whopping 42% year-over-year increase propelled by a 23% quarterly revenue increase to $19.3B. As expected, Intel's cloud and communications businesses benefited the most with huge gains of 50% and 30% year-over-year, respectively. Intel's PC sales also registered a 15% uptick, largely driven by a 13% YoY increase in notebook sales. Intel expects the notebook momentum to carry over into the next quarter, too.

But the uncertainty of these times weighs heavy as, like countless other companies, Intel's decision to effectively withdraw its full-year guidance portends potential disruptions to its business as the pandemic deepens. Bloomberg's explosive report today that Apple will shift to producing its own 5nm chips for laptops also hung thick in the air, with both factors contributing to Intel's stock taking a 5% hit in after-hours trading.

However, amid these uncertain times, another certainty remains: Forward progress is paramount. For Intel, as with any other semiconductor manufacturer, that means moving down to the next, smaller process node.

Intel's woes moving to the 10nm node have caused it considerable pain over the last several years, but the company announced it would release its 10nm+ Tiger Lake processors in the middle of this year. Intel CEO Bob Swan pointed out that the company sees early signs of rapid uptake with OEMs as they prepare more than 50 Tiger Lake-based designs for the holiday season. That number pales in comparison to AMD's projections for 150 designs this year based on its disruptive 7nm Renoir chips. In either case, the Tiger Lake lineup will likely serve to bolster Intel's already-expansive portfolio of Comet Lake systems, so it's hard to make a direct comparison.

Tellingly, Intel cited that its Tiger Lake roster of designs is already 40% larger than its previous-gen Ice Lake platform at the same point in the rollout. Compared to the Ice Lake launch, the company has also amassed twice the number of Tiger Lake pre-qualification chips in reserve as it braces for robust demand from OEMs. Intel also said its 10nm Ice Lake server chips are already sampling and remain on track for release in the second half of 2020.

Intel says its 7nm chips remain on the starting blocks for the fourth quarter of 2021. Despite the Tiger Lake and Ice Lake rollouts, the company doesn't foresee its 10nm production overtaking its 14nm output this year, and even stated that 14nm would remain its dominant node throughout 2021, which isn't surprising given its earlier statements. That means that the 10nm node could go down in the annals of Intel history as its least productive node.

Intel noted that it continues to have a 90% on-time delivery rate, in part due to planning from its seasoned Pandemic Team. Although there have been "some" construction delays due to coronavirus quarantines, it doesn't expect significant disruptions to its roadmaps.

The company did share Q2 guidance, projecting that PCs will be flat to slightly up while data center will enjoy a 35% YoY increase in the quarter. Intel guided for $18.5B in the second quarter, beating expectations of $17.79B.

However, Intel expects its desktop PC, enterprise, government, and automotive segments to recede in the latter half of the year, so it didn't provide full-year guidance due to uncertainties around a global demand slump. Intel says it has already seen declines in its IOTG, industrial, retail and automotive segments and expects some of the initial quarantine-spurred demand to cool in the second half, with a global recession impacting PC sales along with enterprise and government segments.

In spite of the looming challenges, Intel CEO Bob Swan struck a note of resolve as he cited a famous quote from former CEO Andy Grove, "Bad companies are destroyed by crises; good companies survive them; great companies are improved by them."

43 Comments Comment from the forums
Be In the Know