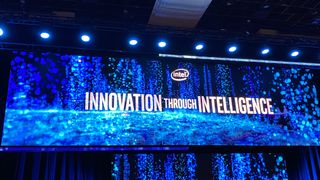 We're here in Las Vegas for Intel's CES 2020 press conference. This is live coverage, so refresh your browser frequently for the latest updates.

Intel teased us with news of a few new announcements yesterday, including the pending arrival of the Comet Lake-H processors for laptops, which will reach over 5.0 GHz and feature up to eight cores and 16 threads, a few vague details of the Tiger Lake processors' AI performance, and our first official glimpse of the NUC 9 Extreme "Ghost Canyon NUC." Intel will provide more information on these products today, and will also announce an expansion of the Project Athena program during its keynote. We also hope to see some more information come to light on the company's discrete Xe graphics card.

Intel's CEO Bob Swan came to the stage to welcome the crowd, marking his first CES appearance as Intel CEO. Swan painted the broad strokes of the company's initiatives, which he says "enrich the lives of every human on earth." Swan credited the company's "relentless innovation" and focus on maintaining Moore's Law as key factors that have helped fundamentally reshape computing.

Swan predicts there will be 175 ZB of data generated per year by 2025, growing 75% per year. Intel predicts that most of this new data will be generated at the edge in uses like smartwatches, self-driving cars, and IoT devices, but only 1% of that data is currently being processed by AI models. That presents a huge growth opportunity for Intel.

Swan pontificated that the data needs to be accessible via networking for computing quickly and then stored, which Intel has been working on for 51 years. Intel sees 5G, AI, and intelligent devices at the edge helping to drive data movement and computing capabilities.

Intel is investing in all three of these categories through acquisitions like Mobileye, Movidius, and Habana. Swan says that compute-based intelligence at the edge can be a life-saving endeavor, and segued into details about its Mobileye acquisition and the AI algorithms that power self-driving vehicles.

Swan detailed his experience riding in an autonomous vehicle in Jerusalem, and explained that he didn't feel safe himself driving in the city's traffic, but felt safe in the self-driving vehicle. Swan also presented a video about how digitized maps can help in disaster relief missions. Intel led an initiative that created maps by processing readily-available satellite imagery with AI, which can then help disaster relief organizations deliver faster help to the correct areas.

Swan invited Navin Shenoy to the stage to discuss some of the company's data-centric projects. Shenoy spoke about how data is creating a "data economy," which then creates new markets like video streaming.

Shenoy highlighted Intel's work with Netflix to develop the AV1 encoder. A Netflix representative came to the stage to discuss the advantages of the new encoder, which Netflix says it enables better streaming qualities at lower bit rates. Netflix cited 60% better compression efficiency. Intel is also working with Netflix on the next-gen SVT-AV1 codec, which we already use in our CPU testing suite. This open-source codec improves performance further by utilizing multi-core architectures more effectively.

Intel believes AI will be a $25 billion industry by 2024. Intel will attack the challenges with a host of different compute options, including custom AI silicon, like Intel's Nervana NNP-I. This product will launch in March, further bolstering Intel's wide range of AI solutions. Intel also recently added Habana Labs to its portfolio.

Shenoy said the Xeon processors are the AI foundation because more AI workloads run on Xeon than any other type of compute. Intel has evolved quickly here, with support for AVX-512 and Deep Learning Boost. Intel will expand DL Boost with up to a 60% increase in inference and training performance with the forthcoming third-gen Xeon Scalable processors.

Shenoy spent some time discussing with an Olympic athlete how 3D motion tracking that helps athletes train more effectively, and then brought a representative on stage to discuss 3D video using voxels. Intel has covered both of these topics in keynotes before (last CES if memory serves correctly), so this is just a rehash of known information. The company behind the 3D video announced that it has progressed from 30fps video to 60fps. The cameras process 67GB of data per second, which is then uploaded to the cloud and processed. Essentially, iterative updates to the system allowed for higher performance. In the future, the company plans to add interactive experiences into the mix.

Gregory Bryant came to stage to talk about Intel's initiatives on the client side of the business. Bryant immediately dived into the PC and how he thinks Intel innovates and optimizes solutions at a platform level.

Intel just sent our a press release a bit early, it looks like it will give us an Xe preview soon.

Bryant said that Intel has verified 25 new Project Athena laptops, which the company had on display on the stage. Bryant said this system-level optimization program has resulted in longer battery life, faster resume times, and higher performance across the board.

Intel demoed the Acer Spin and HP Dragonfly Elite, both of which were announced here at CES 2020. Bryant announced that Google will also join Project Athena for its Chromebooks, meaning the advances will come to Google Chromebooks, too. Intel introduced the Asus Stylus and the Galaxy Chromebook as newly-certified Project Athena Chromebooks.

Intel is also adding 5G modems into its PC platforms. Intel also announced that Project Athena will now extend to dual-screen devices, too.

Bryant invited Lenovo's Christian Teismann, President, Comercial PC and Smart Devices to the stage, where he demo'd the ThinkPad X1 Fold that we took a detailed look at earlier today. That device uses Intel's new Lakefield processor, but like the leading dual-screen devices, it is rather small. Now Intel has created a new Duet concept platform, codenamed Horseshoe Bend, that stretches up to a 17" foldable with an OLED screen.

Levin also demoed using Adobe and WinML to process a video in real time, cropping it dynamically to keep a skier centered in the video.

Lisa Pearce, VP of Intel's Architecture and GPU group, came out to the stage to talk about the Xe graphics architecture. Pearce told us that the Xe graphics doubles performance with the Tiger Lake generation, but did not explain any hard metrics behind the claim. Bryant later claimed that doubled performance was gen-on-gen. Pearce also demoed a triple-A title running on a thin-and-light, and then demoed AI acceleration on the Xe GPU for picture.

Pearce revealed that DG1, Intel's first discrete Xe GPU, running on stage with the Tiger Lake processor. However, DG1 isn't a discrete GPU in the AIC form factor for the desktop. Instead, DG1 is a discrete mobile GPU.

Below you can see a close-up shot of the 10nm Tiger Lake processor.