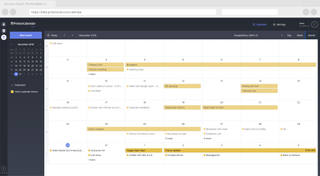 ProtonMail announced Monday that it's started beta testing a new encrypted calendar service, the appropriately titled ProtonCalendar, with some of its users.

ProtonMail introduced its end-to-end encrypted email service in May 2014. In the years since it has updated the service with support for desktop clients as well as a .onion address for use with the Tor network. It released an encrypted contacts manager in November 2017, too, in an effort to keep people's contact info private.

Now it's released the first beta of ProtonCalendar to ProtonMail users with paid plans. (The company offers a free service, a Plus membership with additional features, a Visionary membership with still more functionality and a Professional option for enterprise customers.) The calendar utility is part of ProtonMail 4.0's beta.

So why did ProtonMail decide to create yet another calendar service when Google, Apple, Microsoft and countless app developers offer similar tools? The company said it saw the need for a calendar tool that didn't use personal information to inform advertisements--the same reason why it made its email service. ProtonMail said:

"ProtonCalendar uses end-to-end encryption to keep all your events’ sensitive information private and secure. The event title, description, location, and participants for every event are encrypted on your device before they reach our servers, so that no third party (including ProtonMail) can see the details of your events. Only you will know your plans."

ProtonMail said that ProtonCalendar is very much in beta. It can't share events with non-ProtonMail users, for example, and it can only be accessed via the web. But the company plans to release dedicated apps for the service in 2020, and promised "substantial developments between now and when the project is publicly released."

Now the company offers three major services--an email service, a VPN service and a calendar service--that are supposed to protect users' privacy. It's not planning to stop there, either, as it explained in the blog post announcing ProtonCalendar's beta:

"ProtonCalendar is just the latest project in our mission to create a more private Internet. A calendar app has been one of our most requested products — pairing a secure calendar with a private inbox dramatically increases the utility of both. And soon, you will be able to privately save and share documents to the cloud with ProtonDrive. Our mission is to create an Internet that serves you and doesn’t require you to hand over your personal data to governments or corporations."

An official release date for ProtonCalendar wasn't set. ProtonMail said it plans to introduce a free version of the service once it leaves beta, though, and will offer additional features to people who sign up for paid plans. More information about ProtonCalendar is available via the ProtonMail website as well as Twitter and Reddit.