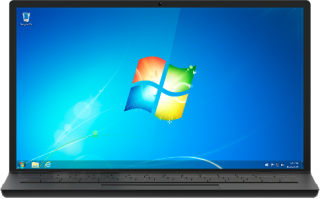 After 10 years of support, Microsoft will stop supporting Windows 7 today. The company will no longer issue security updates, and Microsoft strongly recommends to update to its current operating system (OS), Windows 10.

Those who don't update may be vulnerable to security flaws, and bugs won't be fixed. Technical assistance won't be available, and some games will also be discontinued.

The only Windows 7 machines that will continue to be supported are those in enterprise or education environments that have purchased Extended Security Updates through 2023.

Microsoft has been warning customers of Windows 7's demise, and now the time has finally come. But there are some hurdles. According to NetMarketShare, in December, Windows 7 was running on almost 27% of computers, so Microsoft has its work cut out for it.

While Microsoft is recommending that users update machines to Windows 10, there is another option. It appears that users have been buying new devices with the OS, which is one way to go about it.

Microsoft will focus its attention on Windows 10 from here on out, including variants like Windows 10X for dual-screen and foldable screen devices.

Windows 10 has ramped up the releases and works more as a service now than ever. There have already been a few end-of-life date for versions of Windows 10. But Windows XP has seen patches after its end-of-life date, so it's possible we could see a surprise Windows 7 update at some point.

21 Comments Comment from the forums
Be In the Know